There is a simple implementation of the basic support for an MFD (or MPCD, or PFD), or any device that is basically a set of pages with buttons around the outside to select the page that is displayed.

This works with a SVG file that defines the menu label locations and has a group for each page. The framework manages the menu hierarchy and displays labels corresponding to the buttons.

This is based around the SpaceShuttle displays which are in turn based on the http://wiki.flightgear.org/McDonnell_Douglas_F-15_Eagle#MPCD.

For a straightforward example of this in use, see https://sourceforge.net/p/flightgear/fgaddon/HEAD/tree/trunk/Aircraft/F-15/Nasal/MPCD/MPCD_main.nas

For a more complex example as part of the FG1000 glass cockpit, see https://sourceforge.net/p/flightgear/fgdata/ci/next/tree/Aircraft/Instruments-3d/FG1000/Nasal/MFD.nas 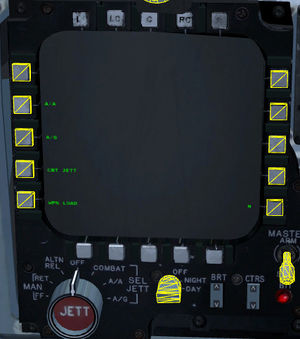 The PFD/MFD contains multiple pages, each of which can be referenced by buttons and displayed.

Emesary is used to pass input information from the buttons into the MFD. This allows MP support hardware interfaces.

To make it easier to use SVG files for UI elements, a number of UI primitives are supported which support highlighting, editing in a generic way (see https://sourceforge.net/p/flightgear/fgdata/ci/next/tree/Nasal/canvas/PFD/).

Abstract element, all other elements inherit from this and have the following methods:

In the SVG file, this will have the name [pagename][name].

An SVG element that is made visible or hidden to indicate that an element is selected, rather than highlighting the text.

In the SVG file, this will have the name [pagename][name].

Element that can take a number of pre-defined values.

===DataEntryElement Element that allows the user to enter input, e.g. entering an ICAO airport name to search for. incrLarge() is used to move the cursor between characters, incrSmall() is used to change the current character, or if the DataEntryElement is not being edited, to start editing it.

In addition to a [PageName][name] SVG Text element containing the string, there must also be a set of [PageName][name][0...size] elements, each representing a single character for data entry.

A set of elements used to display a paged list containing lines of elements. incrSmall() is used to scroll through the list, one line at a time. Pagination happens automatically.

If there are more values than space to display them, then a scrollbar can be displayed.

The SVG file will contain