Drag is, by definition, a force in the direction of the relative wind. As such, it is always positive.

Lift is, by definition, a force at a right angle to the relative wind. It may be either positive or negative.

The Lift force and Drag force are components of the Total Aerodynamic Force.

Because the Lift and Drag forces are always at a right angle to each other by definition, the magnitude of the Total Aerodynamic Force is given by the Pythagorean theorem:

The direction of the Total Aerodynamic Force is derived by taking the inverse tangent of Lift/Drag. The resultant angle is referenced to the relative wind.

When deriving lift and drag numbers for your model you should look at (l^2+d^2)^.5 and atan(l/d). (l^2+d^2)^.5 should resemble abs(sin(alpha)) and atan(l/d) should move near 90 degrees when the wing is producing lift. It will move towards zero degrees at very low values of alpha, and at and after stall.

Or put another way:

For most wings, the magnitude of force-vector "R" resembles abs(sin(alpha)) and arctan(Lift/Drag) is near 90 degrees when the wing is producing lift.

Beyond +/- 22.5 degrees AoA we'll use 0.26 * sin(2*AoA) to approximate lift, and linear interpolate between 15 and 22.5 degrees AoA. (These numbers are rather arbitrary.) The resultant table returns the same value as alpha-rad for the "stable" flight regime so the function will accept the aeromatic coefficient. Outside of the "stable" flight regime a better number will be used allowing more realistic flight behavior at high alpha or beta angles. 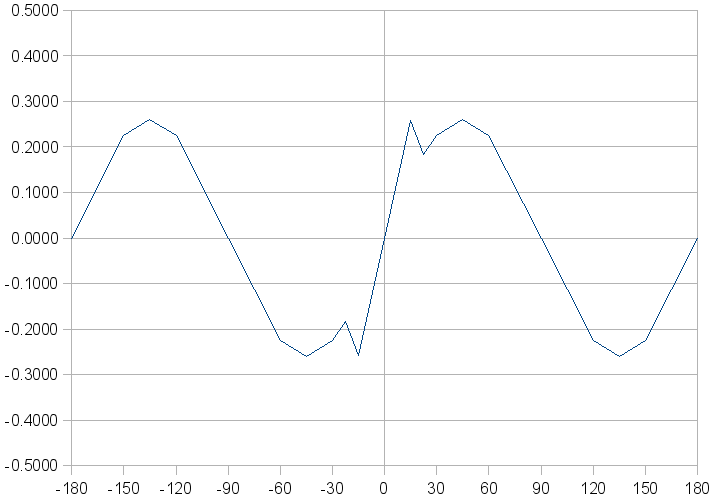 This table can drop directly into an aeromatic FDM to replace an instance of aero/alpha-rad or aero/beta-rad (changing the independent var of course).

Using the Fi-156 Storch as an example

Incorrect definition of the lift direction in this article?

The article claims that "Lift is the portion of the aerodynamic force that is at a right angle to the relative wind, and points up."

But when an aircraft banks into a turn, the lift vector follows the bank angle, leaning towards the center of the turn. And during inverted steady flight the lift value is negative, meaning lift still points towards "aircraft-up", even though that is "earth-down". (At least this is true for the MiG-15bis jsb-model).

I guess it would be more accurate to define lift as the portion of the aerodynamic force which is perpendicular to the wind vector _and_ part of the aircraft's symmetry plain (body x-z-plain), oriented towards negative-body-z.

According to this definition, the given example is wrong as well: Pointing an aircraft straight down would not lead to an ambiguous vector declaration, only pointing the aircraft body-y-axis parallel to the wind vector would (because that's when both defining plains are identical).

Here's my suggestion for the "FIXME" topic about how dihedral angle contributes to roll:

"If an aircraft with a dihedral wing encounters a wind component from the right, the effective angle of attack will slightly increase for the right wing and decrease for the left wing. This is because - from the wing's perspective - the side wind component approaches the right wing from below (leading to an increase in AOA and lift) and the left wing from above (leading to a decrease in AOA and lift).

Rolling the aircraft to one side will induce a side motion which leads to a resulting difference in lift, creating a roll moment counteracting the initial roll angle. This provides roll stability. Roll stability is also affected by the wing's sweep angle and fuselage position, which is why some aircraft have a negative dihedral wing to deliberately decrease roll stability."