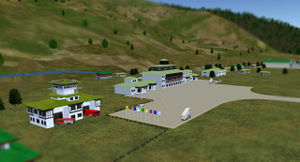 The apron with terminal of Paro 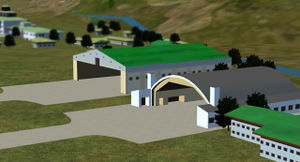 The maintenance hangars of Paro 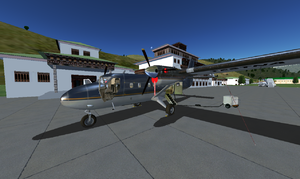 A DHC-6 parking at Paro Airport

The Paro International Airport is situated in the Paro Valley at an elevation of 2,235 meters. So treacherous is the landing that only eight pilots in the world are qualified to land there. The runway is just 6,500 feet long - one of the few in the world shorter than their elevation above sea level.

Strong winds whip through the valleys, often resulting in severe turbulence. Passengers who have been on flights to the airport have described the landing as 'terrifying'. Boeing has said that Paro airport is 'one of the world's most difficult for takeoffs and landings'. Flights are only allowed during the daytime and under visual meteorological conditions - strict light allowances in which the pilot must make his judgements by eye rather than rely on instruments as is the case in nighttime flights. (Rick Dewsbury)

Publishing of first model developments via TerraSync started in 07/2013. The development of the scenery The Kingdom of Bhutan started 2014. At this time, there were already 2 airports. Paro Intl. Airport and Yongphulla Airport (both available via TerraSync). But there is a lot more in this country.

Please read the Readme file and follow the instructions. The download contains the airports Gelephu, Bathpalathang and Yongphulla. Please set Terrasync to download the Paro Airport and Terrain automaticly..

TerraSync has it all! You don't need to download a custom scenery. Terrasync makes it easy for every user always to have the latest scenery installed automatically. But if you want to test the new version of the Scenery The Kingdom of Bhutan download the latest version via mediafire.