From FlightGear wiki
(Redirected from Mirage 2000-5)
Jump to: navigation, search
Not to be confused with Dassault Mirage 2000. 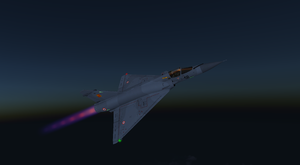 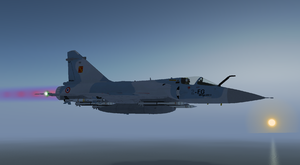 FOX-3: MICA-EM: under 40 NM, choose the radar range just above your enemy's distance. Comparable to AIM-120, but better at a shorter distance. Extremely maneuverable due to thrust vectoring.

Guns: 125 rounds, don't waste them by shooting above 1000 meters, shoot at close range only when you have a solution. In a fight against several enemies, you can't be winchester.

WARNING against aircraft like the F-15, the Mirage has a slight disadvantage (less missiles) and it's better if you can go nearer and engage dogfight, in which the Mirage outturns many fighters.

The Mirage has a very good turn rate, which means you can keep on with full reheat for several minutes in a high-G turn. Against a fighter like the JA-37 or the F-15, it is recommended to enter a two-circle fight. Against better turning aircraft such as the F-16, it is recommended to choose a one-circle fight. When merging with your opponent, it is suggested to throttle up 1 or 2 nautical miles before crossing your enemy, as the engine is a bit slow in response time. Also, the Mirage tends to lose lots of speed when turning: since it is a delta wing, it is basically a flying airbrake. Don't waste energy by climbing high, because you lose speed and offer a still target for your enemy. The Mirage 's turn rate is best around 250-350kts, and you should have full reheat to keep on turning. If you stay close to the ground (where the Mirage is very manoeuverable), the other pursuing you might crash, but pay attention to your speed, if you stall, there’s no way you can regain your speed before crashing at low altitude. Although against other good aircraft at low level, such as the Viggen, it is better to push them to the stall in a one circle fight, as it is slightly under-powered and a formidable opponent at low altitude.

III. Checklist for a dogfight

The engines are now idle, you can go on to the next part of the tutorial.