Canvas texture are dynamically updated on demand and can be placed in the simulator using virtual placements, such as:

will probably want to read up on FlightGear scripting using the built-in scripting language (called Nasal ) as well as the Canvas FlightGear 2D rendering framework, which implements a fully hardware-accelerated scenegraph (using OSG/OpenSceneGraph-based) on top of the FlightGear Property Tree, exposed to scripting space using the Nasal/CppBind framework.

Nasal works very much like JavaScript in a browser - it can be used to extend/create simulator features without touching the c++ code or rebuilding the binary using the built-in Nasal Console or the Interactive Nasal Console for rapid prototyping:

2D rendering is accomplished through a hardware-accelerated 2D rendering API implemented on top of our property tree called "Canvas".

Nasal has scriping space bindings (wrappers) for those APIs. This is the way glass cockpit displays can be fully implemented in scripting space these days. Even without a lot of coding.

Nasal, in conjunction with Canvas, can be used to create modern avionics fairly easily, including PFDs and NDs but also standalone GPS units or any other MFD — for instance, the following images are screen shots showing instruments and GUI dialogs that were solely created in scripting space using Nasal scripting and Canvas for 2D drawing:

To get started with MFD development, you'll want to start reading up on Nasal coding - for example using the following articles as entry points:

Once you understand basic Nasal scripting and OOP (object oriented programming), you'll want to look at the Nasal/Canvas tutorials and APIs:

This should provide a pretty good foundation for anybody wanting to contribute to Nasal/Canvas based efforts like the PFD, ND or other MFD efforts.

However, people wanting to get involved in these efforts don't necessarily need to know how to write code though - there are many other ways to help, i.e. by creating 3D models for instruments, or by creating vector graphics using Inkscape. The most recent effort involving a generic framework for glass cockpit avionics is Project Farmin. I'd suggest to get in touch via the Canvas forum. 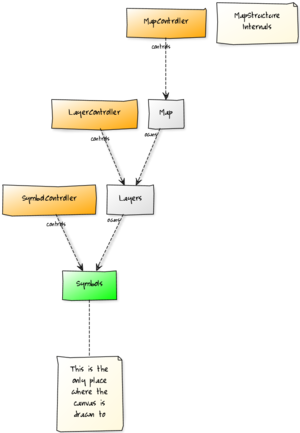 For anything involving dynamic maps and charts (including moving maps), you don't need to create a mapping system from scratch.

Thanks to MapStructure there already is a front-end agnostic scripting space framework in place that can be used for creating pretty much arbitrary maps and charts that are fully interactive, including support for resource management (timers, listeners, caching).

In addition, the MapStructure framework cannot only be used for creating custom avionics, but also for creating GUI dialogs - the back-end is implemented in a generic fashion, so that MapStructure consists primarily of a number of layers that may contain symbols using static or dynamic positions. Symbols can also be both, static and dynamic (i.e. animated). 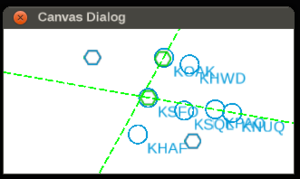 The following code snippet is taken from Canvas Snippets and illustrates how a simple moving map can be implemented using ~20-30 lines of code:

The MapStructure framework already comes with a sizable library of existing layers that can be easily styled and customized for all kinds of different purposes.

In addition, it is is fairly easy to create new layers from scratch. And MapStructure-based maps can also be easily reused in legacy GUI/PUI dialogs, too:

Depending on what you have in mind, we have a few howtos/tutorials on the wiki, including quite a few code snippets/examples in $FG_ROOT

You'd basically create your MFD via Inkscape, as one (or more) SVG file/s and then animate SVG elements via Nasal callbacks.

Canvas based gauges (MFDs) will typically be SVG files (created via Inkscape) and animated via Nasal timers/listeners.

To get started we need a SVG file representing the device (screen,keypad/buttons) - each functional element should be addressable by having an SVG id. Textures can be implemented using png images.

Then, we would assign event handlers for each MFD key.

$FG_ROOT/Nasal/canvas/svg.nas is our existing example on populating a canvas procedurally by parsing an XML file.

The svg parser (svg.nas) is hand-written and can be found in $FG_ROOT/Nasal/canvas/svg.nas, it can be easily extended to support additional primitives/tags, you just need to map them to the corresponding OpenVG equivalents, I think supporting shapes would make sense and shouldn't be too difficult.

Internally, canvas will turn all SVG commands into OpenVG primitives and then maintain a raster image which is rendered each frame, but usually only updated when absolutely necessary (modified/animated).

think about what a "layer" ultimately is: it is an entity to which you can render something and that you can easily show/hide, which kinda matches the definition of a canvas group - which is why ND/MapStructure layers are internally "just" Canvas groups - to see for yourself, use the property browser and inspect any ND/MapStructure tree.

You can directly load SVG files via parsesvg, and then use the findElemetbyID() call to look up an element and animate/transform it - but watch the console, our svg parser is still fairly basic and may be missing some features

you can just get a handle to the element that you're interested in via findElementByName(), and then write it to a group via parsesvg(), implement depth-ordering via the z-index property - if something doesn't work as expected, you can also open svg.nas and extend the parser to support your specific use-case/XML tag.


using z-index layering for your groups - a canvas is a "layer" basically.
But in this case I would suggest editing svg.nas and extend it support raster images via the <image> tag so that this will be automatically set up.

check the console for errors - our SVG parser is hand-written and only supports a subset of SVG instructions, so may need to be extended, or simply use supported inkscape primitives instead.

Next, you need to understand how to load an Inkscape SVG file onto a Canvas, for prototyping purposes it make sense to use a GUI dialog during development (which can later on be trivially turned into an actual instrument) :

To see how Inkscape SVG files can be loaded, please refer to the examples/tutorial at: Howto:Use SVG inside a Canvas 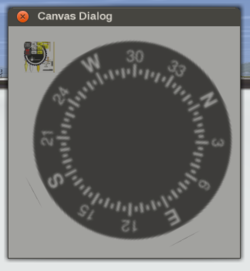 The reference for Canvas/Image handling (raster images) can be found at: Canvas Image

Getting involved as a non-coder (i.e. artwork, research)

Getting involved in coding