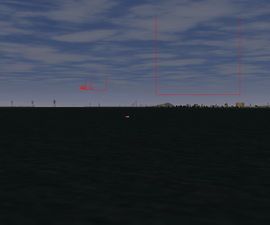 The Glideslope Tunnel is a feature which visually shows pilots in FlightGear the descent angle (3 degrees) and heading they should follow during their approach. It can be loosely compared to ILS, a real-life radio navigation system which provides precision guidance to an aircraft approaching a runway. The tunnel directs the pilot to the best suitable runway (considering wind direction and runway length) of the nearest airport. The tunnel can be activated from the help-menu while running the simulator: View > Toggle Glideslope Tunnel.

The Nasal script that is behind the tunnel is part of each FlightGear installation and can be found in $FG_ROOT/Nasal/glide_slope_tunnel.nas.

The script checks in 5 second intervals for the nearest airport, selects a "decent" runway (based on wind direction, runway length and width) and draws a glide slope tunnel for it consisting of red U-shaped geometries.

There's much that can be improved. One could draw only the next three or four gates instead of the whole tunnel, consider wind direction etc. Also, one might prefer to be able to select a particular airport, and have the tunnel drawn on the runway told by ATC, or one might want a circuit tunnel for tutorials, etc. All doable.

The whole thing is quite simple and flexible. Most of what's needed is already there in one of the Nasal library scripts in $FG_ROOT/Nasal/ and available as built-in Nasal functions. The rest is just combining them and placing square (or other models) in the landscape. The power of fgfs & Nasal.