James has pushed some configuration changes to next (SG+FG) to raise various required versions of things.

If you’re developing on ‘something fairly recent’, you shouldn’t see any difference except it would be a wise time to wipe your build dirs and re-CMake from clean. If you’re on a ‘somewhat older’ Linux, the baselines being Ubuntu 18.04 (their previous LTS) and CentOS 7 (which our Jenkins runs), you should also be fine except for GCC, where you will need a version supporting C++14: in practice this means GCC 5.x or higher. (Or use Clang…) For both of these distros there are officially supported ways to get newer GCCs (we’re actually using GCC 9 on Jenkins now..), so I don’t expect this to be a problem.

As part of this we now require CMake 3.10, Qt 5.9 and OSG 3.4.1, and James started removing various legacy pieces from next around this. There are plenty more cleanups that can be done based on this : especially on the CMake and C++ sides. Things like Boost -> Std stuff, Cmake targets-as-objects support (eg, target_compile_features can be used now).

Windows and macOS should be unaffected BTW - because on those platforms you're always running something you downloaded which is fairly up to date. If you choose to go and download an ancient version of CMake or Qt, on either platform that’s your problem to fix - but you’ll get a configuration error at least.

The idea of doing this /now/ is that the build deps won’t change again during the next two years, barring any surprises.

None of this affects the release branches of course: they continue to work with OSG 3.2, GCC 4.x, Qt 5.4 and CMake 3.0. And you shouldn’t see any behavioural changes because of this either.[1]

James suggests it is *not* in your interest to be running next at the moment, or for a few months. (Wild guess : October) If you aren't planning to be contributing C++ changes, don’t run next, don’t worry about next, don’t look at next.

This is a bit of an exaggeration (people can be curious), but the focus for anyone /other/ than C++ development should be on the release branches, testing and flying there. That’s the reason the nightlies are building from the branch.[2]

The rationale behind all of this being, we need a period of time when we (as C++ developers) are actually allowed to make breaking changes. Especially some key ones are replacing 2D panels and the 2D HUD with Canvas based approaches, which will break aircraft compat (or might do), and various things like that. What I don’t want is non-developers wasting their time reporting that the HUD is broken in FooAircraft, when we’re in the middle of replacing the HUD :)

We might also replace the Canvas backend with a faster one, which again will surely cause some disruption. And so on with other changes.[3]

At the forums some talk about FGcom alternatives lead to a prototype effort of B. Hallinger to develop a Mumble based FGCom plugin. Mumble will offer a new plugin system with the coming version 1.4, which is still in development. The idea of the plugin is, that it governs sending and receiving voice depending on a radio model. The plugin gets hooked up to flightgear using the generic protocol (like FGCom standalone did) and should work out of the box with the new FGCom-mumble protocol (add --generic=socket,out,2,127.0.0.1,16661,udp,fgcom-mumble to launcher).

This enables us to have any frequency that can be tuned in the radio, and also support virtual ones like landlines for Tower intercomms.

For testing this, one needs a compiled murmurd and mumble client from the github Krzmbrzl:plugin-API branch, as well as a compiled fgcom-mumble.so to load with.

The current state of the code is a working basic plugin (as of commit 8a06719) that handles radio frequencies and distance separation, so radio communication/ATC'ing should already be possible! It even features static/noise based on signal quality.

OpenRadar was tested and did work; however one needs to use the "control external FGCom instance" and bind each radio to a separate mumble-plugin instance (`mumble -m`). Reusing the same port twice does not work properly.

ATC-Pie seems to work when using the "external FGCom" option at adding radios and providing "localhost:16661". Only one radio is supported per fgcom-mumble instance tough.

Testers welcome :) For instructions see the forum thread and the projects github readme. 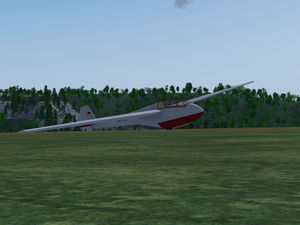 The Bergfalke preparing for winch launch at a typical glider airfield

The core team needs help from Windows users able to maintain a good working Window build. This process already exists to support our Nightly and Release builds, but we are seeking additional help to keep it in good working order. The ability to compile FG from source and some Windows batch scripting is a required skill. If you are willing and able to take up this role, please reach out to James Turner (mailing list), or get in touch via the forum [4]

See above: we need your help as c++ / lua developer and tester!

Thanks for reading FlightGear Newsletter June 2020!