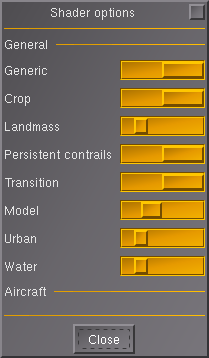 For the future, it makes sense (at a minimum) to make sure these features that require newer hardware can be turned off so that people with older hardware can still run the basic code and see the base scene. In some cases it may make sense to have a backup scheme available so older hardware can see something, even if it's slower or less detailed. (For instance, we have a couple runway light schemes floating around.) But at some point we do need to decide where to draw the line.[1]