From FlightGear wiki
Revision as of 14:15, 13 April 2020 by Johan G (Talk | contribs) (-link: IDG-MD-10X, as that was a deletion request, formerly being a redirect to a section removed by the author of to the article redirected to (IDG-MD-11X#IDG-MD-10X))
(diff) ← Older revision | Latest revision (diff) | Newer revision → (diff)
Jump to: navigation, search 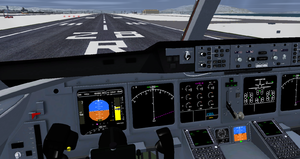 The McDonnell Douglas MD-10 is retrofit cockpit upgrade to the DC-10 and a re-designation to MD-10. The upgrade included an Advanced Common Flightdeck (ACF) used on the MD-11 and was launched in 1996.[38] The new cockpit eliminated the need for the flight engineer position and allowed common type rating with the MD-11. This allows companies such as FedEx Express, which operate both the MD-10 and MD-11, to have a common pilot pool for both aircraft. The MD-10 conversion now falls under the Boeing Converted Freighter program where Boeing's international affiliate companies perform the conversions.[39]

The McDonnell Douglas DC-10 is a three-engine wide-body jet airliner manufactured by McDonnell Douglas. The DC-10 has range for medium- to long-haul flights, capable of carrying a maximum of 380 passengers. Its most distinguishing feature is the two turbofan engines mounted on underwing pylons and a third engine at the base of the vertical stabilizer. The model was a successor to McDonnell Douglas's DC-8 for long-range operations, and competed in the same markets as the Lockheed L-1011 TriStar, which has a similar layout. In its early years the DC-10 had a poor safety record; however, this has greatly improved over time.

Production of the DC-10 ended in 1989 with 386 delivered to airlines and 60 to the U.S. Air Force as air-to-air refueling tankers, designated KC-10 Extender.[2] The largest operator of the DC-10 is U.S. cargo airline FedEx Express. The DC-10 was succeeded by the related McDonnell Douglas MD-11. Boeing, which merged with McDonnell Douglas in 1997, conducted an upgrade program that equipped many in-service DC-10s with a glass cockpit that eliminated the flight engineer position; the upgraded aircraft were re-designated as MD-10s. The DC-10's last commercial passenger flight took place in February 2014, although freighter versions continue to operate. Despite the airliner's popularity, only a few DC-10s are on display, while other retired aircraft are in storage. DC-10s are also used for specialist services, such as the Orbis International Flying Eye Hospital, which has a compartment for performing eye surgery.

This aircraft contains updated versions of it0uchpods' MD-10, and Skyboats MD-10, in one package. The aircraft will be updated here from now on. Good 3D Cockpit with overhead, throttle quadrent, autopilot panel, and more. Decent 3D Model Active development by it0uchpods Hanger

See the right InfoBox for the Repository, or Download. Remember to rename the aircraft's folder to "MD-10".