This month's newsletter marks a year since the first issue was written!

One year ago, in June 2009, FlightGear-head Curt proposed his newsletter-idea at the forum. With multiple (failed) efforts in the past, those involved were extremely eager to get it up and going this time. Stuart was the one that wrote most of the first issue(s). At the time of the second issue, more people were involved and wrote a paragraph or two.

Today, the newsletter is written by a bunch of people, with different interests and relations to FlightGear. It provides an easy way to keep up-to-date with the ongoing developments; both in FlightGear itself and in the community around it.

I would like to use this opportunity to thank those that contributed over the past year. Thanks to their work, the newsletter still exists! In order to reach our next mileage, we would like to emphasize that the monthly newsletter can not live without the contributions of FlightGear users and developers. Everyone (with a wiki account, free to register) can edit the newsletter and every contribution is welcome.

Now, all I can say is: enjoy this brand new edition!

One of the regular thoughts expressed on the FlightGear forums is "I'd like to contribute but I don't know how to program, and I don't have the time".

Unfortunately, there is a common mis-conception that contributing requires programming and lots of free time. In fact, there are a huge range of ways to contribute to the project without needing to write code or spending days working on something.

One of the easiest ways to help is to improve the scenery in your local area by placing buildings/structures using the UFO and submitting them to the FlightGear Scenery Object Database. It's easy, and best of all requires little time to have a real impact. Instructions on how to do this can be found in the wiki, Placing 3D Objects with the UFO.

For other ideas on starting to contribute to FlightGear, you may want to check out: Volunteer.

A new forum for Google's Summer of Code

As some of you may already know, there is now an orchestrated effort going on to get FlightGear ready for becoming a mentoring organization in Google's Summer of Code 2011.

So far, all related information has been collected here in the wiki: GSoC. But to ease the planning and organization process, there has now been a new sub forum set up for talking about anything that is one way or another related to this effort. The forum can be found at: http://flightgear.org/forums/viewforum.php?f=38

This should make it much easier for all community members to participate in all related discussions, without necessarily having to be subscribed to the mailing lists.

So if you have anything to contribute to this topic, please do make sure to check out this new forum.

You are for example also invited to make suggestions for new FlightGear related GSoC projects.

For the time being, one topic from the "New Features" sub forum has already been moved to this new forum, it is about a suggestion to procedurally populate the FlightGear scenery with dynamically created cities, for more details please check out AutoGen Scenery for FlightGear.

New mapping software on the block

Michael contributes new FlightGear mapping software to the communitiy, written in the Ruby programming language: FGMap. Basically it shows your current flight position on an OpenStreetMap map. It therefore has some similarity to Atlas and the online MPMaps. As with all projects, feedback is highly appreciated.

FGMap has many features, including:

Downloads and more information are available at the project's website.

Last month, the infamous QNaN errors that may cause FlightGear to become unresponsive have been linked to potential issues in the Nasal interpreter (and more generally Nasal code) by flug, for more details please see: "Nasal source of Dreaded Triangle Error-source of many probs?". For the time being, you will want to look out for any Nasal code that contains unchecked divisions with unvalidated divisors.

helijah created and pushed both P59 and Bell 222X onto Git. The Bell 222X FDM is still in development. More information and download at helijah's Hangar.

Quadunit404 has announced intentions to produce his first aircraft, the De Havilland Canada DHC-7-150 Dash 7, adding yet another member of the De Havilland Canada family to to FlightGear fleet after active development begins. Currently he is learning how to model using Blender and will be studying the FDMs of other turboprop regional airliners already in FlightGear to get an idea of how to write the FDM.

In the second week of July, the livery database welcomed its 250th livery: a glider club's livery for the Robin DR400, created by top-painter Brett Harrison (Gooneybird). More liveries are welcome as always and can be uploaded!

skyop and Gijs are currently working on animated jetways for FlightGear that can be activated with a click of the mouse. At the moment they are very primitive and only fit 737s. Planned features include automatic attachment to your airplane's door and even multiple jetways for wide-body airliners and A380s. See this thread for more information.

As announced in an earlier edition, Gijs has been (re)drawing the terrain of Dubai. The FlightGear scenery now includes:

The area is represented in its form of 2008, due to the lack of more up-to-date imagery. Given Dubai's massive expansion speed, the scenery can be considered as out-of-date already. Nevertheless it is a great step forward in comparison to the previous terrain, as the image on the right proves.

This new terrain will be available with the upcoming scenery build. Those that can handle TerraGear can download shapefiles from the mapserver. If you are interested in updating or detailing terrain yourself, take a look at this wiki article. 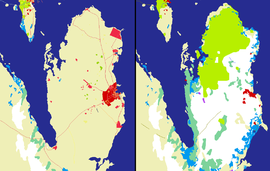 Believe it or not, but here is another Emirate that has been hand drawn! Fahim worked on the peninsula of Qatar, very close to Dubai. Seeing the image on the right, you might think detail/accuracy was lost (except for the urban areas), but I can tell you that the new terrain is far more accurate in all aspects.

This new terrain will also be included with the upcoming scenery build and is already available via the mapserver.

The new version of London Gatwick Airport (EGKK) is available and has improved textures and features. It claims to be one of the few (two?) major international airports in FlightGear suitable for night flying with full lighting textures on all buildings, hazard lights and approximately one hundred lighting masts. The tower even has lit instrumentation visible in the control room. Images are shown at the forum topic.

The taxiways at night are complex but made easier if the official charts are downloaded from [1]. Many taxiway and runway signs have been included to help you on your way. Additional AI ground network and AI traffic have made this into a very busy airport and a single gate at each pier has been thoughtfully reserved so you can find a parking space when you land here (see the readme file for details).

In daytime the airport is fully modelled with detailed textures and even the roofs of buildings having accurate features. Stock model jetways, cargoes and ground vehicles have been added in quantity to give an authentic look to the airport. Large areas of open air car parks are distributed around the perimeter with novel layering of textures to enhance the 3D effect of the parked cars. Similarly, woods and trees have been added in surrounding areas to add more to the overall feel of the airport.

London Gatwick EGKK may be downloaded from MediaFire.

This month: (name of aircraft here)

Rob (MD-Terp), known by many as the founding father of the monthly TransGear events, announced his "retirement" at the forum. With the first event being held just one month after the first edition of this newsletter, TransGear almost reached its first mileage. However, some former participants are discussing an option to continue organizing the event. More on that in a future edition.

We would like to thank Rob for all he has done, to wish him all the best, and deeply hope to see him return to the community one day.