FlightGear Scenery Designer ( aka fgsd ) is a tool to design and create custom-made scenery tiles suitable to FlightGear. It performs a similar function to TerraGear, but in a different way. TerraGear is intended for batch processing of large numbers of files, and thus is used to produce the global scenery distributed with FlightGear and via TerraSync; fgsd is intended more for small-scale fine-tuning of a few tiles through a graphical interface.

Project Status
As of March 2011, it does not appear that fgsd is being actively developed. Links on this page and on pages associated with this project may be bad.

Documentation for fgsd is thin and hard to find. Besides this wiki page, you may want find the following helpful:

If you find more helpful bits of information, please add it here to make it easier to find.

The initial purpose of fgsd was to edit existing scenery because of the lack, at that time, of a decent free elevation model outside the USA. Releases up to 0.3.1 had capabilities to hand-edit part of the terrain. But it appeared to be cumbersome to edit triangles one at a time, and very frustrating as the work done on one tile was obsoleted every time a new global scenery was released. Moreover, editing the result of the TerraGear process proved to be non-trivial because of hidden gotchas on the topological quality of the tiles. Finally, NASA and others released the SRTM digital elevation model that offers a more refined elevation dataset for most of the world, lessening the need to edit elevations manually.

From release 0.4.0 ( to be released ) ( and its pre-releases 0.3.9x - Win32 binaries available here - Other systems, use CVS ), fgsd no longer offers the ability to edit already made scenery tiles. Instead, it works interactively, using the same workflow as TerraGear. This workflow can be summarized as follow :

additionally, 3D object models can be placed here and there to add verticality to this somewhat horizontal world.

One side benefit of this approach is that modified land cover contours can be exported to a format that TerraGear can use. A centralized database of contours is setup for that ( see http://www.custom-scenery.org ). This way collaborative changes to the global scenery can be consolidated and the next round of global scenery generation will include submitted individual changes. Of course, import from the landcover database is possible in fgsd.

Airports are loaded from the airport database file located in the FlightGear base package. It is not possible to edit an airport, but a new definition of an individual airport can be loaded from a file in X-Plane format. This kind of file are typically produced by the Taxidraw airport editor.

What you need to run fgsd

PLEASE ADD TO THIS LIST OTHER PLACES WHERE THESE THINGS CAN BE FOUND.

Clears the current work area ready for a new project.

Opens an existing tile. This is mainly used to place static objects. Editing a tile is not supported anymore.

Opens an existing file. It can be an elevation file or a fragment file. Elevation files contain raw elevation data and provide the basis for a project.

Recent Files
Opens recently opened files. These may be tiles or elevation files.
Recent Projects
FGSD saves work in *.FGSD files. These files contain references to map fragments as well as any land cover that might have been added. Various other pieces of information regarding the environment used to create that work are also saved.
Save Project
Saves the current environment. If the project has already been given a name, that names is used to save the work, otherwise you will be prompted to provide a new name
Save Project As
Saves the current environment under name that is prompted for.
Export
Exports the project to tile format. The results of the export process may be used in FGFS to view the progress of a project.
Quit
Exits FGSD

How to set general options and preferences

This window has 4 tabs :

All parameters are saved in an XML file named ~/.fgsdrc

All path are in Unix convention : directories and names are separated by '/' ( slash ) character. Under Windows, the path may begin with :

Output path
this path will be used at export time. It can be overriden in the export window.
Project history length
number of project file names proposed in the File > Recent projects menu
File history length
number of file names proposed in the File > Recent files menu
Display position in decimal
choose the format of the longitude and latitude displayed in the status bar

FlightGear data path
the path to the FG_ROOT directory. This path is used to find the Airports/apt.dat.gz database, the materials.xml material database, and the Textures/ directory.
FlightGear scenery path
collection of path to scenery folders. These paths contain 'Terrain' and optionally 'Objects' subfolders. They are separated by ';' ( semi colon ) under Window, and by ':' ( colon ) under Unix.

Shapefile directory
a path to a local directory containing shapefiles representing landcover contours
Database hostname
a hostname to a Post-GIS server
Layers
list all .shp files discovered in the Shapefile directory and their assigned FlightGear area type. The 'Use' checkbox shows if the layer is used.

How to import images and georeference them

his window is used to georeference images before import in the main window. fgsd uses a 3 points method to correct rotation and non uniform scaling as well as positionning. A fragment have a contour that is initially set to the image extents. Only the image within the contour is displayed in the main window ( to discard ugly legend, for instance ). 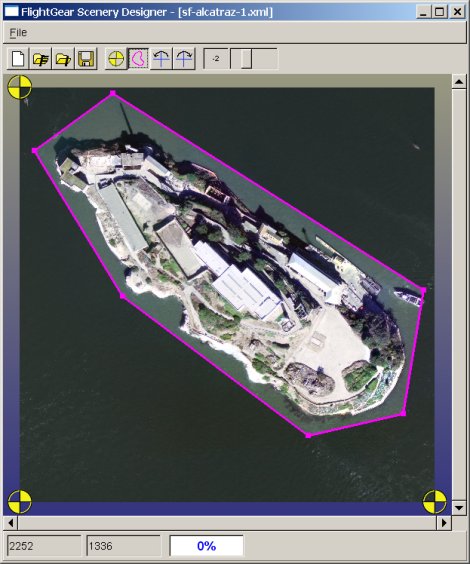 The referencing information, as well as the contour and the image reference, are stored in an XML file.

The File menu has the items below :

New
erase the content of the window to start over.
Open
Fragment

open an XML file containing the reference to the image, the contour and the referencing information

open a JPEG file and set a default contour

Icons, from left to right, are :

New
erase the content of the window to start over.
Open Fragment
open an XML file containing the reference to the image, the contour and the referencing information
Open Image
open a JPEG file and set a default contour
Save
save the map fragment with the name it already has. If it is a new fragment, a name is asked first.
Marker mode
Put the program in marker insertion mode. Every click in the image add a new marker at the mouse position and open a dialog box to position details
Contour mode
Put the program in Contour mode. The magenta contour is then editable. Contour nodes can be moved with the mouse, added or removed
Rotate image 90 degrees counter-clockwise
Rotate image 90 degrees clockwise
Orient the image to correct disoriented scan
Zoom slider
Zoom in or zoom out by moving the slider cursor. Zooming in increase the positioning precision.

When the marker button is activated, every click in the image pops up the dialog box below : 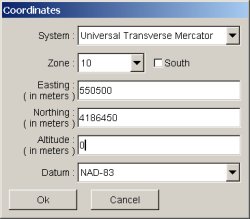 Its purpose is to enter real world position of the click. This can be done in several ways, depending on the data available on the map/image being georeferenced. First one have to choose a coordinate system between :

The first one allows to enter position directly in degrees for longitude and latitude. The others need eastings and northings in meters.

This mode is used to move contour nodes, add new nodes or remove existing one.

Moving is done by dragging the node. To add a new node, first select an edge that should become cyan, and the CTRL-click where new point should be added. To remove an existing node, right-click on the node and select 'Remove point' in the context menu that pops up.

The contour should stay a non-intersecting loop, so the program controls that moves or modifications in the number of nodes are legal.

This dialog box is displayed when the 'Fetch terraserver-usa.com' is choosen from the file menu, or the 'Fetch terraserver-usa.com from here' popup menu option is choosen in the context menu of the main window. In the latter case, the location is the one under the mouse when choosing the option. Otherwise, this is the last location entered. The first location proposed is the one of KSFO, the San Francisco airport. 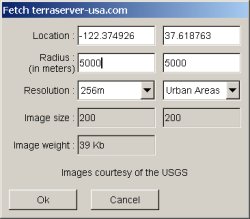 It allows one to connect to the server to get the aerial image centered at the location entered in the first line. The radius is the minimum distance between the center and an edge of the image, and can be a bit more due to the fact that image elements are 200x200 pixel square. Initially, the vertical 'radius' ( right field ) is set with the same value that is entered in the horizontal one. It is possible to change it to retrieve a non squared image.

There are 3 types of images available and several resolutions. An estimate of the size and the weight of the download is given before starting it.

During download, a progress bar is shown in the window status bar with a button to cancel the acquisition.

When acquisition is completed, markers are positioned at the image corners, and a contour is set around the image. It is then possible to save both image and fragment to files, and import them in the main project.

How to organize 3D object models 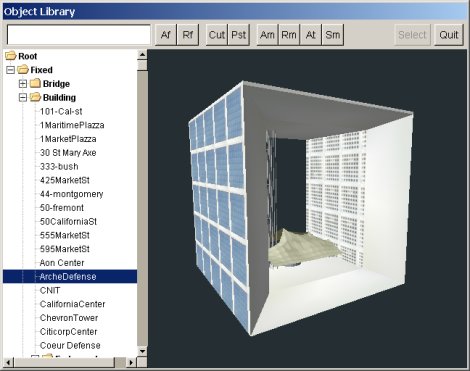 The window has a tree of models and folders at its left. The right part displays in 3D the model selected in the tree. The top hosts a toolbar to manage the tree.

In the toolbar, the entry field at the left is used whenever a name is required by the subsequent button action. It must be pre-filled before one click on the button.

The Af button adds a new folder as a child of the current folder (initially, only Root exists ). The name is found in the entry field at the time of the click.

The Rf button renames the current folder. Again, the new name is the content of the field at the time of the click.

The Cut button removes the folder subtree or the model. It is left in a paste buffer and is not immediately destroyed.

The Pst' button pastes the content of the paste buffer as a child of the current folder.

The 'Am button adds a new model in the current folder. A file selection window is displayed and the user must select a model file supported by PLIB.

The Rm button is used to rename the model. The path remain unchanged

The At button is used to reference an additional file, for instance, a texture image file.

The Sm button stops or resumes model spinning in the 3D view.

The Select button is used when adding a static object in the scenery. It is grayed when the window is displayed from the menu.

The Quit is used to close the window. When a selection is prompted, this button cancel the selection.

The object library is stored in an XML file named ~/.fgsdobjlib

How to load airports and specify additional parameters

The airport selection dialog lists all the airport found in the database that can fit in the terrain loaded in the current project. If some of these are already loaded in the project, current parameters for them are displayed and reused. The dialog looks like : 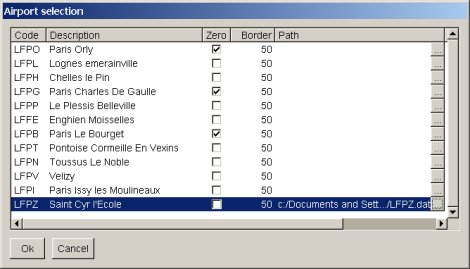 The first column is the ICAO code.

The second is the name found in the apt.dat.gz file.

The third column ( titled 'Zero' ) tells if the labeling of runways with number less than ten takes a zero at the first place ( 09 vs 9 ).

The fourth column is the distance ( in meters ) between taxiways and runways and the airport boundary.

The fifth column is the path to an alternate description of the airport. The requested file must be in X-Plane format ( .dat file ). This is the kind of files can be created by TaxiDraw. The buttons pops a file selection dialog up.

How to export the current project to files suitable for FlightGear 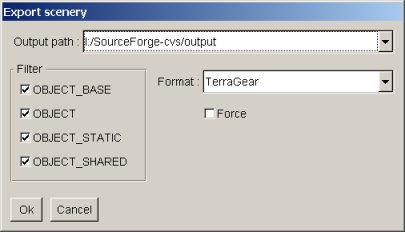