The original testing approach was designed to make running individual tests quite light-weight and easy during development, but allow the full test-suite to be run during a Jenkins build and James would like to see both of those remain in any change to the testing setup. There’s may ways to achieve that end result of course, but some core developers rely on the ‘make changes, hit build-and-run, see tests fail or pass, repeat’ as a workflow very often, so it’s a priority for them that this workflow remains.[4]

The benefit of using an established and well tested test suite framework, rather than writing and maintaining our own framework, is that you have a clear separation of the framework maintainer and the test writers. The complexity is solely at the feet of the framework maintainer. However once CppUnit is included in the 3rdparty/ directory and the framework is established, the job of the framework maintainer is done. For my project relax, the complex code for the framework has essentially been untouched since 2006. Well, apart from some superficial refactoring and cleaning, and addition of the GUI test category in 2011. For the test writer, the advantage is the simplicity of test writing. They do not need to worry about the complexity of the framework implementation. They only need to write a setUp() function, the test*() code, and a tearDown() function to clean up (setUp and tearDown are optional). No knowledge of CMake is required. And they don't have to chase down all the sources required to build the binary. The protected execution of the setUp() and test*() functions is also a major advantage. I think this simplicity for test writers would make it easier for more potential developers to learn about the fgfs internals. They could start contributing to fgfs by writing unit or system/functional tests to learn about the fgfs internal design. If we had good test coverage, then you could say that all new developments need to come with one or more tests. That is how I do things. [5]

The hardest one would be to set up and run only a small subset of subsystems and other infrastructure. But it is possible to write unit tests now. Writing a system/functional test is much more difficult but, with a bit of work, it should be possible.[7] 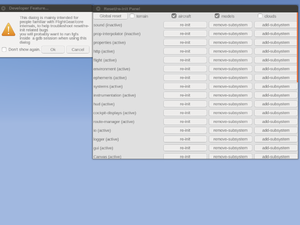 The idea is to make it possible to set up a single subsystem and all its dependencies in a few lines of test code. Then it should be easy to write a test. This is the dependency arrays, subsystem manager/factory fusion, and dynamic dependency resolution algorithm discussed in another thread. Edward is currently working on some ideas, he is also working on subsystem robustness testing for the test suite. This will make it much easier to work with isolated subsystems or sets of subsystems, as many subsystems are quite brittle and if you run them in a way unintended compared to how they are run in fgfs, you see segfaults all over the place (see for example Howto:Reset/re-init Troubleshooting).[8]

We could encourage beginners to add code where they wish in the test suite directories. Keeping it all in a separate directory keeps the codebase much cleaner. In addition, the test suite directories end up having a lot of test data added. Probably, such a chaotic collection of cross-subsystem tests, different test categories, and piles of test data should be isolated from the flightgear src/ directory. This could encourage potential developers to learn about fgfs internals without having to worry about any conventions or stepping on anyone's toes.[9]

Note that for system/functional tests that look at the interaction between code in different directories in src/, my cppunit design is that the test code is located in the new test_suite/{gui,system,unit}_tests/*/ directories. There standardisation of the naming convention is not so important. Because the framework covers a lot more than just basic unit tests, in my branches I also placed the unit tests within this directory structure. I feel that this would encourage non-core developers to contribute random code here, as a learning tool, as long as their tests pass on all OSes. The code in these directories does not need any real organisation.[10]

Another point is that one new test category curently being considered is adding a FGData Nasal script category, where the FGNasalSys subsystem is repetitively initialised and the FGData code is then extensively tested, these tests should be probably not be in $FG_ROOT/Nasal/. [11]

The SimGear test macros are in [13]

On top of this, the subsystem manager add() function would be used to pre-insert instantiated subsystems or dummy subsystems set up as desired for the test. These ideas could easily be implemented side-by-side with the current code, gradually merging in the subsystem factory code. Would such ideas fit into to the current architecture at all? [14]

One thing to be aware of, we do rely on the subsystem-groups to control order of processing with the update() call - and this is important for reducing latency in some situations (eg, FDM is processed before Nasal). There's probably no problem here, but in the past when the (hard-coded) subsystem creation code got changed, we did get some odd bugs due to a subsystem running before another, when previously it had run after. Hopefully, all the cases of that were fixed at the time, but there’s probably a few more lurking. [15]

Howeve, if a new type of "update dependency" was also added, then it wouldn't be a problem. The subsystem manager could then build the dependency tree by asking for all required, optional, and update dependencies.[16]

The last would be useful in the test suite with subsystem manager flags tracking the initialiation status of non-subsystem components, e.g. FGRenderer and SGSky. Parsing this for all subsystems might make an interesting subsystem conversion todo list ;) The functions could return empty std::vector<std::string> objects for leaf nodes and non-implemented subsystems. For the rest, we will need to experiment a little. A nice initial isolated subsystem set would be useful to find.[17]