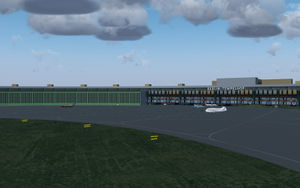 Berlin Tempelhof airport was an airfield in central Berlin, Germany.
In FlightGear it is modelled well, featuring both lots of shared as well as some custom static models.

The airport was opened officially on 8 October 1923, but there was aviation activity on this area before. For example, in 1909 the Wright brothers showed their Wright Flyer there. The old terminal was originally constructed in 1927 and was destroyed during WW II. During the 1920ties, Tempelhof was the one of the busiest airports in Europe. The terminal building still existing today was started in 1936 but was never finished until the end of the war. British architect Sir Norman Foster once referred to it as the "Mother of all airports".[1] and it was - at its time of construction - one of the twenty largest buildings in the world.
After the second world war it first becomes a base of the U.S. military until 1993. In the 1950ties it was also opened for civilian flights. It became famous during the Berlin airlift 1948-49.
Being very small for an international airport and, due to its location close to the city centre, not having a perspective in expansion, the airport was closed on 30 October 2008. Today, the former airport area is used as a public greenspace.

Website by the "Tempelhof Projekt GmbH" with information about the airfield's history and current usage.
Wikipedia article
Timeline on Berlin's airport operator's website