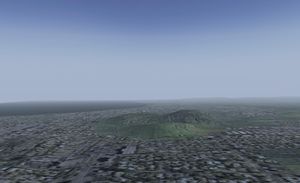 As of 11/2020, Stuart pushed a commit that renders VirtualPlanetBuilder output in FlightGear via the Effects framework.

Below is a screenshot showing Edinburgh using WS3.0:

While graphically reminiscent of FlightGear circa 2002 and not particularly exciting, this is another step towards WorldScenery 3.0.

One of the key differences of WS3.0 from the current scenery is that the terrain mesh only consists of elevation data. The landclass information is encoded in a texture rather than the mesh itself. So we can have much more detailed landcover information without massively increasing the size of the mesh.

In the linked picture, a simple fragment shader is used to look up the landclass in the texture and use that to identify whether to use water, grass or city textures.[2]

As of 08/2020, it's work in progress, and not ready yet. A very primitive implementation/hack was checked in, but it has limited usefulness in its current state. It's of no use at the moment unless you build some terrain via VPB to play with. Progress is slow at the moment due to limited time. [3]

To use VPB scenery: