At the time of writing, it is possible with Flightgear 0.9.9 or a recent CVS copy to:

What to do first

To enable the carrier, you must edit your preferences.xml file. This lives in your FlightGear data directory, the one under which your Aircraft, Scenery etc directories reside. Open this file in a text editor (such as notepad on Windows, or TextEdit on OSX - Linux users are probably familiar with such software... try kedit or gedit if not.)

Search for the word ``nimitz'. You ought to find something that looks like this :

Save the file and quit the text editor. 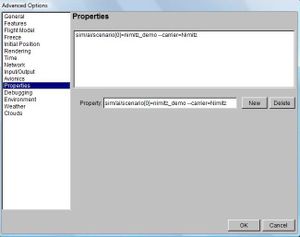 You are now ready to start FlightGear. To position your aircraft on the carrier at startup, use the following [[Command Line Parameters|command line options (noting the upper-case "N") :

Note that several FG aircraft are carrier capable, but the Seahawk is possibly the easiest to fly to begin with.

If you are using the Windows or OSX launcher to run FG, you should find a text entry box in the gui that allows you to specify command line options, add the above options there. Linux or Cygwin users can just add them to their usual startup command; ``fgfs --carrier=Nimitz --aircraft=seahawk'. Please note the uppercase ``N' in ``Nimitz'.

In the FlightGear Wizard: go to Advanced... > Propeties and make a new property with

With version 1.0.0 there comes a special box for the carriers on the Airport selection page of the Wizard.

Once FlightGear has started, you should ensure that the parking brakes are off, ease the plane a little way down the catapult pressing ``L' to engage the launchbar (this might be best done from an external view initially.) You should notice the aircraft being pulled into alignment with the catapult and see the strops appear and hold down the aircraft. This will only happen if your aircraft is close enough to the correct spot on the catapult; as a rough guide, for the default parking position the seahawk's nose should be rougly level with the deck observation bubble.

To get the carrier into as good a position as possible for launch, select the ``ATC/AI' menu, then check the ``Turn into wind' box under the ``AI Carrier' section.

You should now notice the carrier begin to pick up speed and turn into the wind, and naturally the deck may tilt somewhat as it turns. You should wait for this maneuver to finish and the deck to return to level before moving on to the next stage. 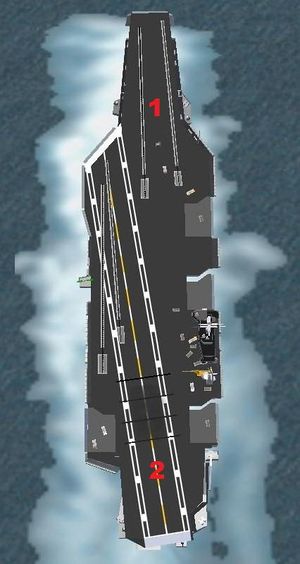 Being engaged to the catapult, you should spool up the engines to full power, ensure the brakes are off and that all flight controls are in a suitable position for launch. When ready, press ``C' to release the catapult. Your aircraft will be hurled forward off the deck, and you should be able to raise the undercarriage and climb slowly away, being careful to avoid stalling.

Actually finding the carrier in a vast expanse of open water can be very difficult, especially if visibility is poor. To assist with this task, the carriers are equipped with TACAN, which allows a suitably-equipped aircraft (Seahawk at present) to obtain a range and bearing to the carrier. First, you must set the appropriate TACAN channel, 029Y in this case, in the radios dialogue (ctrl-r or choose Equipment/Radio Settings from the FG menubar). You should, if within range, notice the DME instrument show your distance from the carrier, and the ADF instrument (next to the DME in the seahawk) should indicate a bearing to the carrier. Turn to the indicated heading and you should see the DME dial indicate your closing in on the carrier.

This is the most difficult part of the operation, as in real life. You might well find Andy Ross' A-4F Skyhawk Operations Manual useful here. Basically, though, you should use the TACAN to locate the carrier, and line up with the rear of the deck. As this part of the deck is at an angle to the course of the vessel, you may need to correct your alignment often. Ensure that the aircraft is in the correct configuration for approach (the Help/Aircraft Help menu should contain useful data for your aircraft) and that the gear and the arrestor hook are down. 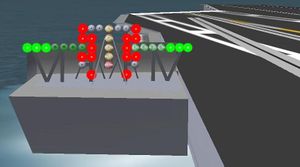 As you approach you should see, on the left hand side of the deck, a set of brightly coloured lights - called the Fresnel Lens Optical landing System (FLOLS). This indicates your position on the landing glideslope. You will see a horizontal row of green lights, and when approximately on the glideslope, an orange light ( known in some circles as the ``meatball') approximately in line with the green lights. When approaching correctly, the meatball appears in line with the green lights. If you are high it is above, and when low it is below. If you are very low the meatball turns red. If you fly to keep the meatball aligned you should catch number 3 wire.

Carrier landings are often described as ``controlled crashes' and you shouldn't waste your time attempting to flare and place the aircraft gently on the deck like you would with a conventional landing - ensuring that you catch the wires is the main thing.

Immediately your wheels touch the deck, you should open the throttles to full power, in case you have missed the wires and need to ``go around' again; the wires will hold the aircraft if you have caught them, even at full power.

If you wish, you can then (with 0.9.10 and later) raise the elevators from the ATC/AI menu, taxy onto one of the elevators, lower it (uncheck the box on the menu and don't worry, they are VERY slow...) and taxy off into the hangar.

Don't be discouraged if you don't succeed at first with carrier landings - it's not an easy maneouver to master. If after a little practice you find the Seahawk too easy, you could move on to the Seafire for more of a challenge!