The de Havilland Canada DHC-2 Beaver is a single engined, high wing, propeller-driven, STOL aircraft developed by de Havilland Canada, primarily known as a bush plane. It is used for cargo and passenger hauling, aerial application (crop dusting and aerial topdressing), and has been widely adopted by armed forces as a utility aircraft. The U.S. Army Air Corps purchased several hundred and nine DHC-2s are still in service with the US Air Force Auxiliary (Civil Air Patrol) for search and rescue. A Royal New Zealand Air Force Beaver supported Sir Edmund Hillary's expedition to the South Pole. Over 1,600 Beavers were produced until 1967 when the original line shut down, and today the aircraft is in such demand that there is a steady market for finding surplus examples in air museums and rebuilding them.

The Beaver is one of the most famous bush planes in the world, and the most-produced all-Canadian aircraft. Due to this success, the Royal Canadian Mint commemorated the Beaver on a special edition Canadian quarter in November 1999.

The Beaver is a standard aircraft on FG 1.0, and I recently had a chance to test it out. I never was able to start the thing but with some help from the aircraft help menu I finally brought the engine to life.

The exterior model is an extremely pleasing, attractive one, complemented by and interior with rounded dashboard pane that looks so much like the actual aircraft ( from photos ) and like a 1950s automobile. Instruments are clear and the engine controls really work.

The engine comes life with a deep throated growl that says that this is a big husky. (Beavers don't growl). As the aircraft rolls down the runway, a quick tap on the enter key keeps the tail line as it comes up, and we are climbing strongly.

If handling mimicks the actual aircraft, handling is very pleasant, stable in flight, in turns, and capable of slow flight, without any unpleasantness. I was even able to fly hands off without the autopilot when climbing as I attempted to get a nice screenshot of the airplane.

The only thing better would be a float model, which I must try next.

It really handles well, like all DH aircraft, possibly a family trait? 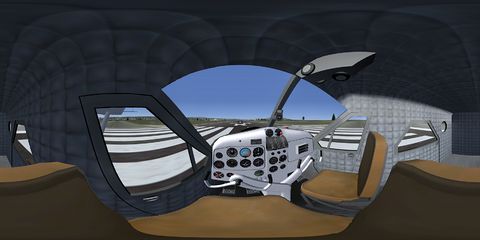