A virtual airline (VA) is a dedicated hobby organization that uses flight simulation to model the operations of an airline. Virtual airlines generally have a presence on the internet, similar to a real airline. There are over 100 virtual airlines of significance currently active in the internet (supporting a number of flightsims), with thousands of participants involved at any one time each using different simulator platforms.

There has been a rapidly expanding number of VAs in Flightgear, and there is not enough people to support this bugeoning explosion of VAs. So think twice about creating a VA, because we're running out of pilots.

On the other hand, if you really want it and are confident, go ahead and create! This is flightgear, Fly Free! You're FREE to do what you want.

Virtual airlines were started to give a sense of purpose to activities conducted within a flight simulator. This basic premise has evolved over time, along with available technology, to provide increasing levels of immersion but always with the same core purpose. When combined with increasingly powerful personal computers, advancing flight simulation software, and communications networks, virtual airlines are often able to provide compelling, realistic, experiences similar to operations inside a real airline. Virtual airlines also provide an avenue for members to gain access to additional content, such as aircraft and scenery, for use with their simulator. The appeal varies; for younger members, virtual airlines provide a sandbox environment where they can experience the corporate environment of commercial business in the airline industry, without the risk of financial loss. These organizations also provide an outlet for those who are interested in aviation but unable to fly themselves in real life due to financial, health, or other reasons. Most of all, its one step closer to enthusiasts feeling more involved in an airline environment and share their interests with others. Virtual Airlines also benefit the flight simulator community by providing valuable services such as ATC, events, and general help and knowledge.

There are several elements that are common across many virtual airlines:

Alliances point to groups of airlines working with each other in joint operations. Currently, the following are active:

Before the merger of most virtual airlines into Atlas and gradual declines of airlines following that event, several independent virtual airlines were active. These airlines, as well as airlines proposed but never actually created include the following: 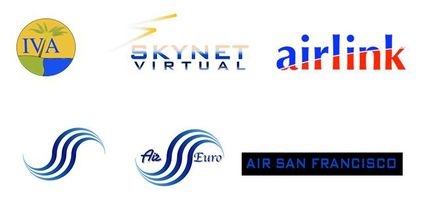 Logo of most virtual airlines as of February 2010.

Both Cloud9 and Aerosuperb are subsidiaries of merlion.

Claims have been made of the use of both flight simulators and virtual airlines as training devices for criminal activities, although to date no conclusive link has ever been provided to indicate a situation where a virtual airline has provided flight simulation training to anyone involved in a terrorist activity. Jermaine Lindsay, one of the four 7 July 2005 London bombings, may have used flight simulators to practice flying an airliner, with an accusation that he was registered with a virtual airline. A person of the same name listed his nearest major airport as Heathrow and clocked up 30 hours in two months with SimAirline.net. The website later denied the member's linking with the bombing, and indicated it was working with the Metropolitan Police to establish whether its former member was the bomber. The website stated that it provides information about airlines and free add-on software for Microsoft Flight Simulator and does not provide flight instruction to its members. The 9/11 Commission in the US concluded in 2004 that those responsible for flying the planes into World Trade Center and Pentagon had used PC-based flight simulators for training. Despite the initial concerns of the involvement of virtual airlines in these terrorist activities, largely little has come from these claims to date and no changes have been noted as occurring in their operation as a result.