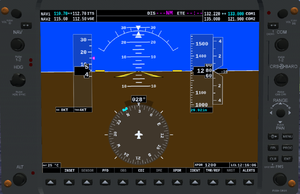 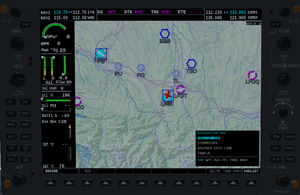 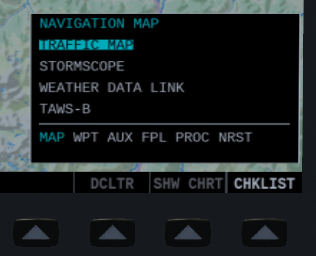 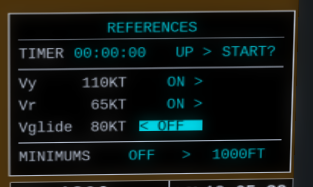 The HSI displays a rotating compass card in a heading-up orientation. Letters indicate the cardinal points and numeric labels occur every 30°.
Major tick marks are at 10° intervals and minor tick marks at 5° intervals.
A digital reading of the current heading appears on top of the HSI, and the current track is represented on the HSI by a magenta diamond bug.
The HSI also presents turn rate, course deviation, bearing, and navigation source information.

The HSI contains a Course Deviation Indicator (CDI) with course pointer, TO/FROM indication and a sliding deviation bar.
GPS, VOR1 and LOC1 have single line arrow, while VOR2 and LOC2 have two lines arrow.
GPS CDI is available only if a course has been set via the route manager, VOR and LOC show arrow when the active NAVAID is received.

Turn the HDG knob to adjust the heading, doing so the heading bug will be positionned along the compass.
A window showing the desired heading is shown for 3 seconds.

NAV stack is on the left on each device. It is composed by

The COMM stack is on the right side on each device. It is composed by


The map orientation and zoom can be modified by pressing the MENU button.

The zoom level is an number between 7 (largest range) to 13 (smallest range). The range calculation depends on two other factors: latitude and size of the screen (eg. EIS size). Here's a table for ranges without EIS and for 40° lat:

When the desired zoom and orientation are selected, validate by pressing ENT button. Pressing the CLR exit the modification window without saving the changes.

You have to choose the map background you want to be displayed. For this you have to use the options in your .fgfsrc. This is subject to change in near future in order to allow to change the maps while the device is running. For now there are some options to tells the zkv1000 which map you want: 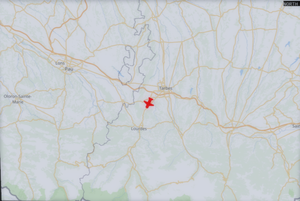 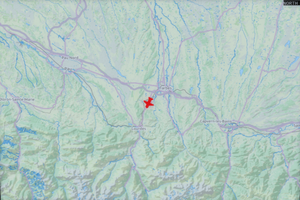 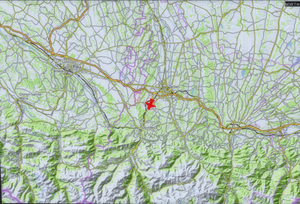 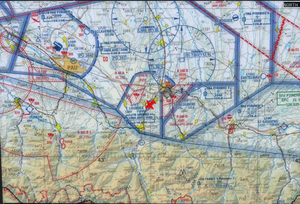 (screenshots to come as soon as the highlighting system will be repaired) By default the navaids around the aircraft are shown on the map (airports, VOR & TACAN, NDB)

By turning the MFD Outer FMS knob you enter in menu system, turn the Outer FMS knob to select the NRST page. The available nearest navaids searches are in light-blue chars, the grey entries aren't available for now.

As the day of writing, here are the available searches:

In near future it will be possible to compute a DTO, or include the navaid in an existing flightplan, but for now these features aren't yet released...

The scrolling feature isn't really well managed, and there are some nasty things displayed, but a go-to-bottom then go-up correct it in most of the cases

On PFD without other windows opened, click on MENU key in order to make the System Settings windows displayed. You can use Inner FMS knob to adjust the brightness of the screen percent by percent from 0% which is very low, to 100% which is adapted to very shiny conditions.

During night, you can also make the ZKV1000 body being lighted (keys, softkeys and knobs descriptions). To do so, select the Light using Outer FMS knob, and adjust the lighting with the INner FMS knob. There are four level, from 0 which is light off, to 3 which is very luminous. Adjust to the level you are the most comfortable.

If the aircraft provides checklists, they can be visualized directly on the MFD.

To show checklists, press the softkey CHKLIST (which is available only if aircraft has at least one checklist). The checklists are divided into two groups:

A checklist may have more than one page, to navigate into the pages select NEXT or PREVIOUS and validate by pressing ENT button.

To exit a checklist, or selection of checklist, just press the CLR button.