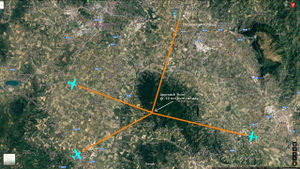 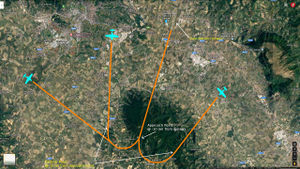 Red Griffin ATC can be operated both with the mouse and the keyboard. You will find a new item "Red Griffin ATC" in FlightGear's menu from which you can open and close the main dialog window as well as get help about keyboard commands and information about the addon. You can open or close the main dialog window by pressing the backslash key. You can also show the "pop-up dialog" by pressing "Ctrl + Backslash" key sequence. 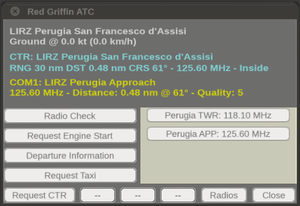 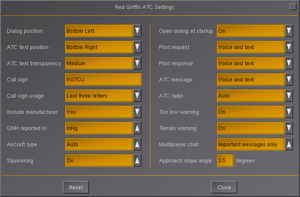 Red Griffin ATC provides a simple Controlled Traffic Region (CTR) management however effective and enough for normal flight simulation. CTR range is determined according to the the supposed size of the airport controlling it. Airport size is arbitrarily determined by the number of radio stations operating in the airport. The greater the number of radio stations, the bigger the supposed airport size and according to this schema:

CTR range is therefore determined according to this schema:

Red Griffin ATC can guide the pilot to the proper route up to the final leg to the runway. In order to work properly, the assisted approach and landing procedure requires the pilot to provide the right operational settings, in particular aircraft type and approach slope angle. It is also very important to set the altimeter according to the QNH provided by the ATC in order to follow a reliable and consistent altitude.

As for approach slope angle, Red Griffin ATC uses 3 degree as a default value, however this can be changed in the settings dialog. The pilot is therefore required to properly set the approach slope angle before initiating the assisted approaching procedure and according to the destination airport and runway. The correct approach slope angle is usually reported in airport charts and each airport usually has its own angle setting.

Before initiating the assisted approach procedure (or before taking off) it is advised to follow this very minimal checklist:

When the aircraft is about to land, while it is flying the final leg to runway and within 5 nautical miles from the runway landing area, Red Griffin ATC gives the pilot both the distance to the touch down point as well as an "approach and slope monitor" in order to assist the pilot in following the right course and glide path to landing.

Course correction is represented by a "bar" showing the direction in which the aircraft should turn in order to align to the center of runway. Specifically, when the monitor shows "<===" means the pilot should turn to the left, whereas in case it shows "===>" it is needed a turn to the right. The longer the bar, the farther the distance from the center of glide path.

In case the aircraft is perfectly aligned and following the proper glide path, the monitor will show "ok".

Red Griffin ATC has been developed and written by Antonello Biancalana (Red Griffin, IK0TOJ) in Nasal language and it has been tested in FlightGear 2019.1.1, 2019.1.2, 2020.3.x and 2020.4.0 git, specifically in my Fedora Linux FC33. I understand there can be bugs or the ATC procedures may be formally incorrect. On this regard, any feedback, suggestion, criticism and hint on how to improve this addon are warmly welcome. You are kindly invited to contribute with your ideas and feedback by posting in the forum thread.

It was not my computer though as at that time I owned a Commodore VIC20 and, alas, the only "flight simulators" available for it were Ron Wanttaja's IFR Flight Simulator and Anirog's Flight Path 737. The big step forward was Flight Simulator II for Commodore 64 in 1984 and featuring a Piper PA-28-181 Archer II. The giant step forward was in 1987 when it was released the Commodore Amiga version (one of the most amazing and very best, revolutionary, exceptional computer of all times) which featured three aircraft: Cessna 182RG, Gates Learjet 25G and Sopwith Camel.

Red Griffin ATC © 2019-2021 Antonello Biancalana, Red Griffin, IK0TOJ (for those who wonder about this code, it is my HAM call sign)