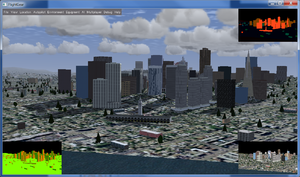 Deferred rendering is not able to display transparency. For the moment, clouds are renderer separately and should be lit and shaded by their own. Transparent surfaces are alpha-tested and not blended. They would have to be drawn in their own bin over the composited image.

The code is in the main branch of the official repository. Any other location is not maintained anymore. 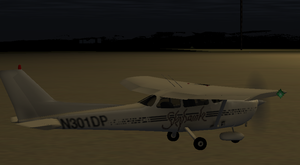 The Rembrandt renderer uses an XML file to setup its pipeline for each viewport described in the camera group. This file describes the way the intermediary buffers are setup and how the different rendering stages are sequenced. The general outline of a pipeline file is as follow :

A buffer is a texture used as a storage area in the GPU. It's size is usually a multiple of the screen size, but fixed size is supported (typical for shadow map). The description of a buffer is described below :

A stage is an unit of rendering to a group of buffer. Most stages are predefined and their type is not free. When a type is not specified, the name is used. Stage types are :

A stage description is outlined below :

Stages render in buffers (except for the display stage). Attachments describe which buffers are affected by each stage.

Passes are only available in the lighting stage. Three kind of stage are allowed :

A typical lighting stage is a succession of 5 passes :

Each effect attached to the fullscreen passes define the way blending is done between the pass and the previous accumulation of render.

The Rembrandt renderer is now integrated in the main repository but needs to be enabled to run. Use the --enable-rembrandt option to start Flightgear with this new renderer.