You will find that controlling your aircraft, with the official Raspberry Pi keyboard and mouse, too be rather difficult. A joystick will solve this problem. The Logitech Extreme 3D PRO is plug and play, for the most part, with FlightGear. Most modern joysticks should also work. There is a dialog box to assign common joystick controls, in FlightGear. Controls are also properties, however that is for later. This joystick dialog box is found in the top menu bar under “Files”. Next you will find “Joystick Configration” to click on and that will bring up the desired dialog box.

After running jstest-gtk click on your joystick within the jstest-gtk window. Next click on the “Calibration” button. The calibration can be performed within this dialog box. Consider making note of these values before performing the calibration. Do not forget to cycle the hat switch that is on top of the stick. This is because this switch is considered as a proportional input just like the stick axis. In order to save these new settings, after a reboot or new power up, do not close jstest-gtk at this moment. First open a terminal and enter the below command in order to save the new calibration values. The “device_name” of the joystick is in the first dialog box of jstest-gtk. It will be something like js0, js1 etc. 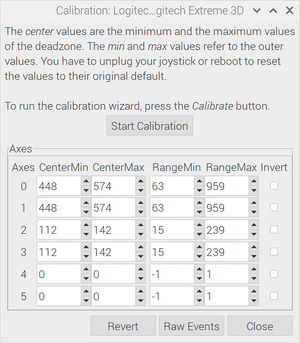