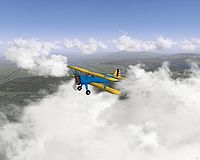 Flightgear has also seen brilliant work on the Airbus A320 and Boeing 757 by Jonbourg, aswell as a Boeing 767-300 by Liam which both the 757 and 767 have a large group of people working on them, making them very rapidly developing aircraft.