Tim Moore added now support for shaders on objects. This means we can have stunning effects like chrome effect, fresnel shaders etc on aircrafts in a near future. Tim has also integrated the 3D clouds code as an "Effect". This makes editing the cloud shaders significantly easier.

As the song goes “but not for me”. But now they are for you in FlightGear. In a moment of madness on the IRC Channel I agreed to develop Ground Vehicles as an AI Class. It turned out that a few modifications to the AI Ship class would be a good jumping off point for the new class. I started with trains, because I thought they would be big enough to see easily from an aircraft. A very simple train with just 1 carriage. These are relatively common on commuter routes in the UK. Jon Stockill knew just such a train, and was familiar with a suitable route in Wakefield. (Where’s Wakefield you might well ask – I had to – it’s near Leeds in Yorshire.)

As quick as a flash, he had written a script and extracted an accurate route for the railway. Not only that, but Jon added overhead power support pylons all along the route. That was a bit of a challenge, because originally we had thought that the train could be fairly loosely guided between waypoints on the track, but now would have to run on the track accurately enough to go between them. So I had to add a cross-track error calculation, and after a bit of fine tuning:

The accurate track Jon extracts has a bit of a drawback: it isn’t the same as the one currently in the scenery. We hope that will be sorted out soon, when a few licensing issues are resolved.

Meanwhile, Jon added a nice bus and a bus route also near Wakefield. It turned out that diesel and electric trains weren’t nearly as visible as we had thought. So why not a steam train? That should be easier to see, and there is a preserved railway up in the spectacular countryside of the North Yorkshire Moor which has just such a thing.

Next, Heiko Shultz produced a fine model of the ICE 3 train, and Jon extracted the route from Frankfurt to Essen, but with the addition that it was dual route so that we could run trains in both directions at the same time. The ICE 3 runs at high speed, but the existing train parameters has been optimised for 30 mph, so a bit more coding was needed. In particular the train does not run well at high speed in reverse, so it was necessary to have the trains reset to the start of the track at the end of their hour plus run.

All this is nice eye-candy, but what is the downside? There is a frame rate cost. Provided there are no more than 10 ground vehicles in the scenario this is usually small.

So what about boats? It seemed like a good idea at the time to extend some of the ideas we developed for trains into the MP Carrier scenario. We had some models converted from Savage models lying around, so how about some escorts for USS Vinson. In any case Alexis Bory had a dormant plan for some low-poly aircraft models for the deck park, so it was a good time to revisit the Vinson scenario. First, we added some aircraft to the deck park. Then Alexis took and completely reworked the Oliver Hazard Perry (FFG 7) into something very nice indeed. I worked up a new class: AI Escort. This enables stationing of an escort by range and relative or true bearing. The escort can have patrol range for the station, and can carry out a random patrol of the assigned station.

Then I found a very good model of the AIM9L Sidewinder which has been lying around in cvs for years. Too good: it includes the motor and warhead, and the unseen bolts which attach the fins. Too good to waste though, so after a bit of poly reduction, they got added as well.

Hey, that could be a real photo! It isn’t!

Next Alexis wanted a SAR helo which completes the Trains and Boats and Planes theme. So I modified the AI Escort Class (after all a helo is just a fast frigate), and between us we put together a model of the Seahawk H60B. This happily maintains a station half a mile on USS Vinson’s port side.

So, what else? There is also a close escort in the shape of a Ticonderoga class CG. This model isn’t particularly good, so I am working up a new one.

The current Battlegroup is completed by LPD17.

We added a cruise liner, just to make the Captain of the MP Carrier think about where he was taking his Battlegroup.

What is the downside to the Vinson Battlegroup? Pretty much none. So far, on my system, I have seen no adverse effect on frame rate. Your mileage may vary of course.

Hmm, the Mk41 Launchers are fully featured with cells and hatches. I have a simple model of a TLAM. I wonder if a modification to the AI Ground Vehicle stuff …

What else, where next?

We have a few more goodies in the pipeline. Some US railroad models. We await Jon to extract a suitable rail line for that one.

We have some wagons waiting in the wings.

And, if I can persuade Jon to use it, a whole container port. Which comes with its own container tractor, which uses the train code to pull trailers around the dockside. Container ports work around the clock, so there’s some floodlighting just to add a little more realism.

All this stuff is in cvs right now.

Thanks are due to Jon Stockill, Heiko Shultz and Alexis Bory for their contribution, and for their testing of the code.

The C172p is the default aircraft in FGFS. Though the aircraft was updated last year for the 1.9.1 release, there was still a lot of things left to do. Thanks to Dave Perry, the aircraft has now the right position in the air and on ground, and the instruments are now lit. Stuart has added some new tutorials, and improved some of the control models in the cockpit. 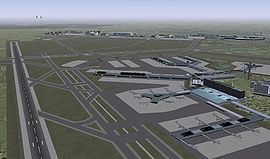 Gijs de Rooy has redrawn the airport layouts for some of the Netherlands' most prominent airports, including Amsterdam Airport Schiphol (EHAM), Lelystad Airport (EHLE) and Volkel Air Base (EHVK). Taxiways and tarmacs are now correctly placed and up to date. A significant improvement over the previous airport layout is the use of shoulders (concrete borders around taxiways), just as you would encounter at the real airports. The groundnetworks for these airports have been updated or created as well.