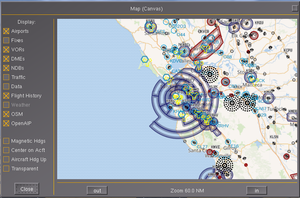 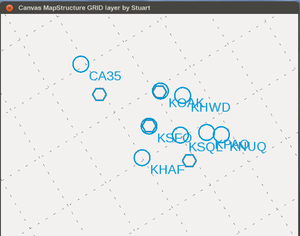 Stuart committed some changes to update the Select Airport dialog to use Canvas MapStructure Layers to display airport information, rather than the now deprecated map layers. The change should be largely transparent to end users - the only significant change is that your can display navigation symbols. This is all part of a long-term effort to provide the building blocks for a Garmin G1000 - these layers could be used for the airport display on the MFD, and could easily be combined with the APS layer to show a moving aircraft.[5]

Stuart added some new Nasal Canvas MapLayers to support Slippy Maps, as used by most web-based mapping services such as openstreetmap. This allows us to display sectional charts (for the US - vfrmap.com), and airspace information (courtesy of openaip.org), as well as a openstreetmap data. The canvas Map dialog has been updated to support these layers. Map data is retrieved over http and cached locally.[7]

The enormous variety in current glass flight decks means we really need to think of a new way of defining glass cockpit layouts.[8]

Depending on how we deal with this challenge, the question is whether that means that the usefulness of FlightGear will also gradually taper off. [10]

Instead of just making one-off tweaks like the consumer sims did, we (as a team) emulated entire systems like the vacuum, pitot-static, and electrical systems, so that failures would be realistic. In the RNAV age, we need to do the same thing; it's just that it's a bigger job. FlightGear will still be great for people who want to practice the mechanical parts of flying (e.g. crosswind wheel landings in a Cub), but will slip further and further behind for people who want to use it for real IFR practice.[11]

Nasal as such is fast, and compared with the cost of rendering the terrain, rendering a canvas display is fast on the GPU (you can test by rendering but not updating a canvas display), and unless you're doing something very inefficient, calculating a display but not writing it to the property tree is fast (you can test this by disabling the write commands). It's the property I/O which you need to structure well, and then canvas will run fast. And of course the complexity of your underlying simulation costs - if you run a thermal model underneath to get real temperature reading, it costs more than inventing the numbers. But that has nothing to do with canvas. [12]

it's a lot of work to code all these displays which someone has to do, but there's no reason to assume it'd be hopeless performance-wise.[13]

we need to be realistic here: The G1000 is a fairly significant piece of computer hardware that we're going to emulate. It's not going to be "free" particularly for those on older hardware that's already struggling. However, hopefully we can offload a chunk of the logic (route management, autopilot/flight director) to the core, and do things like offline generation of terrain maps to minimie the impact.[14]

that's exactly the kind of device James hopes the new code can support. He's read the G1000 pilot's manual, and *thinks* that nearly all the functions can be provided by the current GPS code It would be great if people could look over the current GPS features and indicate any pieces you think might be missing - additional commands, additional search features, extra data, or anything really. [15]

Please keep in mind that most tile servers discourage bulk downloads. For the whole planet,oomlevel 8 is approx. 67k files, at zoomlevel 9 you have 265k, level 10 has a little over one million tiles. And one would probably want to go up to level 15 (roughly 1e9 files)[16]

would it be possible to provide an offline tool to pre-fetch a region, like TerraMaster, or terrasync.py? Call me old-fashioned or paranoid, but I don't want FG to go online and do stuff automatically, I prefer downloading what I need manually so that I know what gets onto my harddisk. Also - think of all the people with poor home internet which might have larger bandwidth only in a library elsewhere.[17]

that would certainly be possible - the code retrieving the data is pretty trivial and porting the Nasal code to python or some other script should be straightforward.[18]

we need some better data sources, especially with direct routing replacing airways in many areas, and having airspace data would help the map displays, but the current API is specifically designed to support G430, G1000 and similar class devices. Adding RNAV approaches is eminently doable, see the the RNavController base class which the GPS/FMS layer uses to allow new waypoint / route segments to define how they are flown and drive CDIs [19]

Getting the algorithms right, and keeping the data up to date every 7 weeks (we have only a tiny sliver of that data currently), is going to be much more of a challenge. I expect that it's probably an order of magnitude more complicated than our current flight dynamics (etc.), so we'd have to grow our contributor base, and find funding to pay at least Curt (and maybe a couple of others) full time to manage the project. Note that that's what has happened for other complex FOSS projects, like office suites and browsers, which generally end up working through a foundation, rather than our current relaxed circle-of-friends arrangement. The reason it's so much harder now is that the software *is* the product for GPS navigators, FMSs, etc. (unlike with older avionics, where the hardware was the main thing). That means that emulating even a simple unit like the GTN 650 or GNS 430W is almost difficult as building one, so we're trying to keep up with armies of full-time software developers at Garmin, Avidyne, etc.[20]

According to the Route Manager wiki page, we already have support for SID/STAR data provided from Navigraph, which is released on the AIRAC cycle, and costs a pretty small amount (9 EUR for a single download of FMS data, or 90 EUR per year) Given the relatively low cost, I don't think that we as an organiation want to get into trying to digitize data ourselves just to make it open-source or public domain. Particularly given the low cost of a download. We might want to digitize the STAR/SIDs for the default airport with each release so there are some approaches available for those who don't want to purchase the data.[21]

Stuart has been in contact with the author (Sébastien MARQUE) of the ZKV-1000. While he himself doesn't plan to implement a G1000, he's very happy for it to be developed in that direction. Stuart's broad plan is to make a copy of this in fgdata or fgaddon, and use it as the basis for a G1000, taking the opportunity to use Richard's MFD code and making as generic pages as possible for other glass cockpit applications.[22]