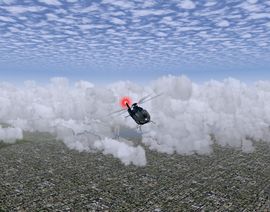 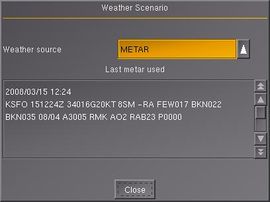 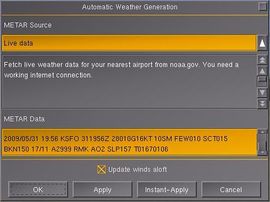 Weather in reality is the state of the atmosphere at a given time for a given place. Calculating the complete atmosphere or even a small part of it will easily eat up all your computing power and result in very limited frame rates. FlightGear only calculates the state of the atmosphere for a vertical line beginning at earth's center straight through your aircraft up to approx. 100,000ft AGL. Most calculations are based on the International Standard Atmosphere. FlightGear's fundamental atmosphere parameters calculated are:

The line for which FlightGear calculates the atmosphere is divided into two major segments and several sub segments. The bottom major segment (the one closest to the ground) is called the boundary layer. It reaches up to 500ft above ground and connects directly above it to the so called aloft layer. By definition, in the boundary layer, the atmosphere - mainly the wind - is affected by the structure of the earth's surface, while in the aloft layer there is a free flow of air. Within the boundary and the aloft layer, one up to many layers of atmosphere may be defined that have certain characteristics, like wind direction and speed. The basic weather definition in FlightGear is

All other values are derived from these parameters. When the aircraft changes altitude and passes through these layers, a linear interpolation between the parameters for the entry above and below your position is performed to compute the values for your exact altitude. The atmospheric parameters described here are defined in preferences.xml and can be changed at runtime by selecting Environment->Weather Conditions from the menu. The entry "Boundary transition depth" defines the thickness of the zone where the effects of the boundary layer and the aloft layer mix. When you fly within 500ft of the border between boundary and aloft layer, both tables are interpolated.

Clouds are - other than in real life - not visible humidity, when dew point and temperature match. They are a separate system and so are defined separately. They are also stacked in layers and for each layer the defining parameters for clouds are

Once again, definition of the base cloud set is in preferences.xml and runtime adjustments can be done via the menu Environment->Clouds

Defining weather can be a tedious task. Setting all the parameters for each layer and defining clouds is not everybody's fun. To get a weather definition done quickly, FlightGear has a build in METAR interpreter. This can read the coded weather information from a METAR and apply a more or less reasonable weather, that matches the conditions described in the METAR. Since a METAR only describes the weather a a station on the ground, many parameters, esp. for the higher atmosphere are just plain guesses which just try to be reasonable. You can either pass a metar string as a command line option like

or use the Weather Scenario dialog from the menu at Environment->Weather Scenario, where you can select a predefined weather, enter your own METAR or even enable live weather data. This options enables a task, that calculates your nearest airport and fetches the current METAR for that station from NOAA weather service. An internal interpolation routine applies weather changes smoothly when changing the METAR.