Difference between revisions of "User:Texnicer/devblog"

Adding a existing component to an existing aircraft

Creating a working copy of the aircraft

At first I aquired the Aircraft. It's part of the sourceforge/svn-repository.

I got the plane searching throught FGADDON/AIRCRAFT (https://sourceforge.net/p/flightgear/fgaddon/HEAD/tree/trunk/Aircraft/) using the SVN system.

note: sourceforge does not support the correct svn-codeline, you need to correct the path starting after trunk'

Locating the system to add

I went into my system's Flightgear root directory $FG_ROOT - which is nice to know. On ubuntu and DeBIAN systems it is likely to be found in:

Hence I looked for garmin196 invoking a full recursive file-search

Understanding the components of the system

Adding the model to the aircraft, positioning

note: understanding the euclidian space, the axis, the system's origin, helps alot placing the model roughly and visual in the cockpit. finetuning can be done while correcting the .xml file being in the simulator and using the "debug"-menu and "reload model" once and again. 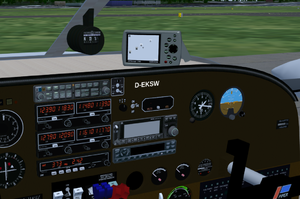 Adding an internal view to an existing aircraft

note: for the DR400 the views are stored in /nasal/view.xml which is not default IMHO