A (ramp) marshaller is a person who guides aircraft using hand (and wand) signals at a parking ramp. This is a new feature that being worked on for a more generalized scale in FlightGear. Until this gets merged into the fgdata repository, you can get this from omega95's fgdata clone or the new Singapore Scenery development.

Currently, support can be added to airports with the UFO, but soon ramp marshallers will be added automatically if a parking spot's flag is set to enable it. This will integrate FlightGear parking positions, ramp marshallers and other features that might come up related to parking ramps or gates.

These are videos of the first prototype of the ramp marshaller.

To use the ramp marshaller with a compatible aircraft at a compatible airport (scroll down to see how you can make aircraft and/or airports compatible), simply taxi to the gate/ramp you want to park at and click on the marshaller waiting at the ramp. His hands should move from rest position (both wands down by his sides) to direct you to the ramp. It's recommended to taxi to the ramp on the taxiway lines as long as you can see them and once they go out of view, follow the marshaller's instructions. Make sure that you're not taxiing faster than 5 to 10 kts at the ramp.

But we're teaching him new signals. If you want to teach him a signal, scroll down to find out how. To find out what the signals look like, take a look at the videos above. 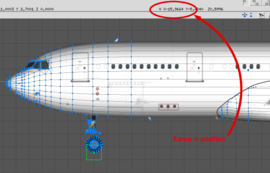 Demonstrating how to get x-position of nose gear with AC3D for ramp marshalling compatibility.

It's actually very simple to add ramp marshalling compatibility to an aircraft, the only file required to be edited is the aircraft's -set.xml file (or common xml file for aircraft groups). The user is still required to use some kind of 3D modeling program to get the position.

This should be all! The ramp marshaller should be able to recognize the aircraft and guide it to the right position at the ramp!

Adding ramp marshallers to an airport

NOTE - In the future, this will change because ramp marshall positions are going to be connected to an airport's groundnet.xml file. 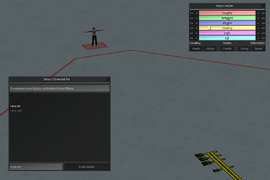 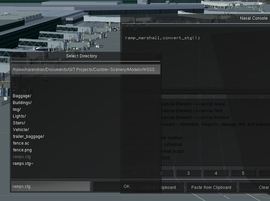 Contributing to the module

The marshaller's signal positions are stored in the ramp_marhsall.nas Nasal file in a hash. This is so that the signals can be accessed easily by other functions.

You can mess with the positions in a 3D modeling program or in FlightGear itself. Just look in the property tree under /airports/{icao}/ramps/ramp[n] (find the correct 'n' index for the person last clicked on by looking at the /airports/active-ramp property) and set the ramp marshaller's function to something random (so it isn't recognized) and change the values in the tree. Note: to get this to work properly, you first have to click on the nearest ramp marshaller, look up his index, and then click on a different marshaller so that the other marshaller's properties are not updated.

If you would like to add a new hand position (say both hands out stright), then you'd add this to the bottom of the pos hash.

Note that one only needs to specify the rotations that are non-zero using hash syntax (key:value) in the arguments to the rmPos.new function. Remember to put a comma after the line right before the new one you add, since each line needs to end with a comma.

Now, you can call this position as pos.hands_out_front to be used in the sequence function. Or if you'd like to get or set one of the position values.

To add the signal sequence, add a new if state at the end of the last if(me.function == "<function_name>" statement with the sequence. You can use me.phase to control the sequence phase/step.

Then, add the signal sequence.

HINT - To animate the marshaller to a position you specified and then to go to the next step when it's complete and be achieved like this:

Soon, new features will becoming available which lets the ramp marshaller model be specified in the position config file.