The Piper Aerostar or Ted Smith Aerostar is an American twin-engined propeller-driven executive or light transport aircraft, designed by Ted R. Smith. It was originally built by Ted Smith Aircraft Company, which after 1987 became part of the Piper Aircraft Corporation.

Currently only one variant is modeled in FlightGear: 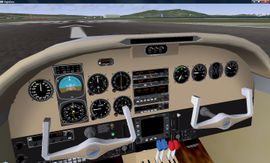 The cockpit of an Aerostar 700