The airspeed indicator gauge can be configured to display either km/h, mph or kts by setting the property /instrumentation/airspeed-indicator/texture to either

This can be done on startup as a command line switch or at runtime by setting the property with the Property browser. 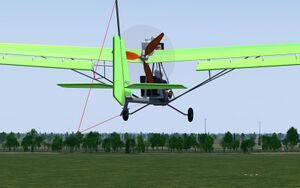 To use this feature, a small configuration file is needed telling FlightGear where the banners are on the ground. It is a small XML file placed in your FlightGear home directory (which is ~/.fgfs on Linux and .../Users/.../AppData/Roaming/flightgear.org/ on Windows) named groundbanner.xml. Create this file and paste the following content into it; it will tell FlightGear where to put the banner:

This is definitely something different, the classic ultralight trike, somethings I have not flown before in the simulator. Personally I have seen these things droning overhead and flown very freely, but I have wondered what it would be like to fly.

Starting on Half Moon Bay runway, the Dragonfly is really a minimal aircraft. Startup is with the s button and the throttle responds quickly. In a trice we are off and climbing steadily, it seems like at 1000 feet per minute or so. At about a 100 ft, I tried turns to the left and right, and the aircraft is very stable if slow to respond, which may be a good thing, it is the kind of air frame that would never be designed to any sort of a rolling outmaneuver.

The stall is gentle, and actually the aircraft transitions from a stall with power off to a steady 400 fpm descent , which is pretty safe. The engine has to be started again by pressing the s key for an anxious moment there is no power no matter what. Heading back to the airport a few low level turns at low speed about 50 mp the airspeed indicator is marked in MPH establishes the safety of the aircraft beyond doubt.

Landing is easy enough, it is easy to judge the distance to the ground as it can be seen directly beneath and to the sides of the aircraft

The model is fairly complete, with a multibladed prop and moving joystick and elevator, although eh ailerons do not move much at all. The absence of a pilot and back seat thrillseeker really detracts from the model, as the screenshots show, however this has been noted by the author as a 'to do'.