visibility ranges can be mapped to Canvas groups, with visible symbols being promoted/demoted between groups as required to reduce the degree of property I/O [1]

The Airport dialog uses a fixed Range, and a variable Screen Range. This is because if we just use the Range, as we zoom in the airport center may fall outside the range, but the runways/taxiways/parking should still be visible. In contrast, the map-canvas currently uses a fixed ScreenRange of 200, and the zoom-in/out function changes the Range value.[2] 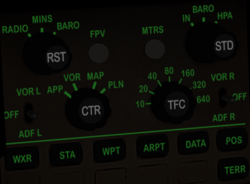 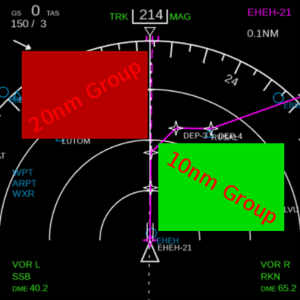 What this means is that we can be much smarter, and much more efficient, when updating the map - because we don't need to remove symbols, we may only need to "hide" them - because they may not be visible in the currently selected range, but they may be visible if one of the other selectable ranges is chosen. The point being, we can stop removing symbols like crazy when toggling between ranges and simply hide stuff that is outside our current visibility volume due to the currently chosen range and/or map mode. Thus, what we were originally talking about is treating each selectable range as a "visibility volume" that gets its own Canvas group:

Symbols would be added according to their distance to the viewpoint.

As you can probably see, from an algorithmic/performance standpoint, this would be very much superior compared to what we're currerntly doing - especially when dealing with heavy layers (think FIX) and extreme ranges (i.e. 160/320, 640 nm) Basically, we would be dealing with one Canvas group per selectable range and then allocate/de-allocate Canvas elements using a pool of elements, where the invocation of the onAdded() and onRemoved() methods merely promotes/demotes elements between different canvas groups representing visibility ranges, so that the overall allocation overhead would also be reduced. Thus, like Thorsten and Richard said, the amount of property I/O could be greatly reduced, so that even a Nasal space solution may provide sufficient performance.[3]

Since property I/O is known to be the major culprit when it comes to Canvas performance, it makes sense to optimize anything that can help reduce the amount of property accesses (reads/writes). SearchCmd() as such is just a function that returns a vector of search results, for each vector element, the layer-specific symbol controller will be invokved to instantiate/animate and update the corresponding element.

Since we're -so far- only doing range-based filtering, this means we're also adding elements, and thus properties, that may not even be visible - e.g. due to the currently selected map mode and/or the FOV.

Thus, it would make sense to do additional clipping/filtering at the searchCmd() level by allowing constraints to be specified to exclude/filter entries that are not visible.