You can define any point on Earth as the initial starting position for your FlightGear-Session, as well on airports as outside, ashore or in the mids of the oceans, even somewhere in the air above. You even do not need to have the Sceneries installed for that Starting-Position! (But if the scenery is not available you will see nothing but a big blue water around you – wherever you are! Of course you could load that scenery then by TerraSync)

If you are flying just by yourself (i.e. without having Multiplayer activated) you may just choose an airport and leave it up to FlightGear to place you somewhere onto a runway. That is the most easiest procedure at all – but absolutely unrealistic – and if done, while others are around, it is absolutely recklessness against those already there! Because if you start FlightGear with the MP-Options directly on a runway you cannot watch for somebody being there already, or being on short final to it, or if there is an ATC who may start to dislike you a lot, or … or ...! Best is you just use proper procedures and always start at a parking-position, gate, or terminal when you are not alone! That way you even have the advantage of getting accustomed to the controls and instruments again while taxiing to the runway.

So please consider the following procedures to define your start-position in FlightGear:

Starting within an active Multiplayer environment

When starting your session you should ensure that you do not disturb ongoing operations by others. Nobody likes it, if e.g.:

This procedure will help you to avoid that all, because you are only visible to others after being at an empty gate or parking-lot!

In general that means:

In detail that means:
1. disable the "--multiplay" options during start-up

They will be set to default when starting MP later.
(If you want to set unique MP-options you may predefine all MP-options -- EXCEPT the "multiplay=out"!)

2. Start at any airport you want by defining e.g. "--airport=EDDF" (nothing else is needed!).

(Of course you may also predefine any position as described in the other procedures -- EXCEPT the "multiplay=out"!)

3. After you taxied to a free Gate or parking-lot of your choice

and you are visible to everybody - and nobody is shouting on you !!

and then continue with item 3 above!

This option is the only one that meets reality! And should always be used when flying amongst others.

There you will find e.g. the position:

Thus you could define this “Gate” by adding the options

Of course you also could use the above shown “lat/lon/heading”-values to define that position in GPS (see next chapter) – but you would have to convert those from Decimal to Grad° (You could do that with e.g. http://www.fcc.gov/mb/audio/bickel/DDDMMSS-decimal.html).

Sorry enough: Those Starting-Points are not defined for all airports - due to the limited availability of unpaid volunteers. But You can define your own “groundnet.xml” or add parking-lots to an existing one according to the above scheme – for HowTo get additional GPS-data see the next chapter! That way you could create your own personal “VIP-Parking” for your most favorite airports! Save the new "parking.xml"-file into the '$FG_ROOT/AI/Airports/ICAO-Code/' (or if you use FlightGear 2.4.0 or newer into$FG_ROOT/Scenery/Airports/[i]/[C]/[A]/ICAO.groundnet.xml) directory. Please note, however, that parking positions are defined as part of a ground network file that was originally designed for FlightGear's AI system. Checkout the Interactive_Traffic page for more information on ground networks.

And if you do that for yourself, why not add a few more statements and make them available to everybody! See e.g. the http://wiki.flightgear.org/index.php/Volunteer and airport-diagrams, which are available in the Internet.

At http://media.lug-marl.de/flightgear/Airports.tgz you can download an optional Airports folder with parking positions for 7125 airports.

You always have 3 possibilities to define your Starting-Positions by GPS: 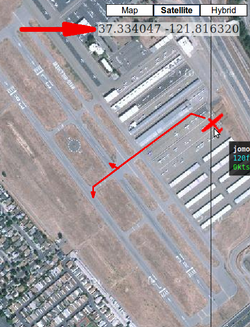 1. Open MPmap and zoom into the airport you wish. Move your Mouse-pointer to the place you want – e.g. to the place on KRHV where “jomo” is parked now. And then read the lat/lon-data in the upper right corner (see the big red arrow). In addition decide on the direction you want to view: In the example on the left that is parallel to runway 31R, i.e. 310°+14°=324°. (The 14° are the difference between the magnetic and the cartographic North-pole in that area – if you do not know it: Just try e.g. the 310° and vary the heading until you are satisfied – or try the next item!)

2. You could also just land on that airport and taxi to a parking-lot you like and park there. After parking open inside your cockpit 'Menü → File → Browse Internal Properties → position' and note down the „latitude-deg“ and „longitude-deg“ (up to 6 decimal places is enough!). The needed heading you can take directly from your Compass.

3. Of course you could also get that data by any atlas or navigation system and convert the data if needed!

If after that you end up in KSFO instead of where you wanted, then you probably have mixed up the Longitude and Latitude – or mistyped - or you found a new way to define a non existing place on earth!

Starting-Position in relation to navigational points

This is a wonderful way to test unique parts of a flight: With that Option you can start at unique locations and start your exercise, e.g. a “final approach”, or flying towards a NDB under different wind-conditions, etc.

As reference-point you can choose any navigational aid available in FlightGear, e.g. VOR, NDB, FIX, Carrier, airports – whatever! But watch out: For some VOR's and NDB's there may exist multiple stations with the same ID! e.g. there is a VOR “RIED” with the ID=”RID” southwest of EDDF (Germany). Another VOR “RID” exists in Richmond (Indiana, USA) - thus you never know where you end up. That does not happen very often – but you should be aware of that “mishap”! More secure in this cases is the above GPS-procedure!

Try e.g. '--fix=FITKI --heading=276 --vc=100 --altitude=1500'
that will place you directly over a FIX for the ILS approach for runway 27R at KOAK. The speed (vc=100) fits to a C172 and the altitude (1500) is the proper altitude on the glide-slope for that. So this is a good Start for training visual Approaches (and or ILS). Other FIX-points you may find by opening MPmap in the area you are interested in and search for “all fixes”. (ref. http://wiki.flightgear.org/index.php/Mpmap )

Starting-Position direct on a Runway

This is the easiest way to start – and thus often used to get beginners into the air for the first time! But as I pointed out at the beginning you should use this option only when you are all by yourself, that means without Multiplayer activated! And all of us will be very thankful if you promote not to use this option when other Multiplayer are in the area!

Anyhow there exist 2 possibilities for this:

Starting-position by defining just the airport

In this case FlightGear choses a runway itself according to wind-direction etc. - and thus assigns the very same place for everybody (that wants to be piled up one above the other!). This usually end's up with lots of bad words by

You have no ideas about what kind of nice words those guys are able to use for you in such cases – you better switch off your FGCOM and/or MPchat if kids are around!

So we definitely do not suggest to use this option – but if you want to use it (when you are alone!):

Starting-position by defining an airport and a runway

This is even worse than the above! To all that bad happenings from before you are now even prone to start in a different direction to the other traffic! And thus those others would not just use even worse words – they would even laugh about you, that “stupid that does not know that you must start against the wind!”

This option may be useful only for real beginners, that cannot yet perform above possibilities. These poor guys can choose a small, usually unused runway as their Starting-Position. As I said: As long as they still are “bloody beginners”!

You can find available and fitting Runways in MPmap by selecting the Airport wanted and zooming in.