It has been suggested that Submitting Screenshots be merged into this article or section. Discuss this merge. This has been proposed since January 2014.

This howto will explain how to make nice screenshots in FlightGear.

The best screenshots are technically correct, the lighting and colors are right, and the composition is good.

Explaining how to compose a picture is difficult, so instead I suggest you to read tutorials and explanations given on many websites on the web like this one: Composition (visual arts)

From a broader perspective, it would be desirable if new screenshots could also showcase new FlightGear's capabilities using high quality settings. Say someone googles "VFR guide" because he wants to know something about VFR flying and comes across a bunch of screenshots of FlightGear - we'd really want to impress here so that user gets curious and tries FlightGear. Back when there were still manuals, all most simulators (Falcon 4.0 for instance) had the highest detail level for all the internal screenshots, not the lowest. So that's something to keep in mind when showcasing FlightGear.

A good virtual picture needs a good quality. That means:

This means you need a decent computer with middle - good specs. At a minimum, you should able to run Flightgear with smooth frame rate with high anti-aliasing settings. Some people don't have this, so there is another solution proposed by Melchior Franz : [1].

How to get some unusual/ interesting views

To get some ideas, it's a good idea to look for aircraft picture pages around the web like Airliners.net. It will give you some ideas, and in addition, it is always a good idea to think about what you actually want to show case. While a snapshot of an airliner in mid flight is -for instance- a nice way of showing its latest features on the forum, it typically doesn't really last as an overall impressive screen shot. Placing the aircraft in a scene where some implied action is taking place will most of the time already make a huge difference. Capture the plane while it's banking, gear is retracting, etc. will imply some dynamic motion in your otherwise static image. In this respect, it may help to think of a little story, a scenario that you're re-enacting. Trying to capture a few key scenes from a flight may also help to make the difference between an average and an interesting screen shot.

Try switching between them to see what you like more(I prefer Chase view). Playing around with position of the camera will help too. As an example if the aircraft is turning and banking, make a shot from the wing to the aircraft facing the ground. Or while approaching the runway, a shot from behind the aircraft would be good. For I'm a missile view, moving the camera forward and looking back at the missile and the aircraft can make compelling shots. 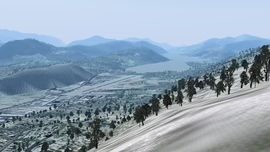 Setting the Tower on top of a mountain looking down to the airport with the Place_Tower.xml

For this we use the Tower view and Tower View look from. This assumes that the virtual camera is on the Airport Tower, ca. 30ft above the airport level. You can choose via the Menu which airport is used. That's nice, but limited.

Anders Gidenstam made a nice nasal script to move the tower whenever you control-click on the ground. You can find it here. Copy the code between the <PropertyList>-tags and put in somewhere in your preferences.xml . Now, when you Ctrl + left click somewhere on the ground, you can set the position of the tower view. The view is still about 30 feet above ground level; assuming you want to stand at eye-level, you can change the line

is a wide-angle view. With this, you can show large areas of the scenery or flightdecks.

For this, use the cockpit, passenger, or tower view, then position the virtual camera at the point you want. Pause the sim and pan the virtual camera all the way around, saving many screenshots so they cover the entire visible area. Now use your favourite panorama software and stitch it! No software yet? Use Google; there are several freeware programs outside. A common choice is Hugin; it's free and open source, cross-platform and used by many professional photographers.

If you want to make full spherical panorama take a look at this tutorial.

The difference of wide/narrow angle. See how the background changes using a zoom.

You can change this by pressing ⇧ Shift+X or X or using the Mouse-wheel in View-mode. The field of view is by default set to 55 (degrees).

Increasing the field you get wide angle up to 120 degrees. That's interesting as it covers a whole part of the scenery but also seems to make objects appear far away. Use it for showing large parts of sceneries, or long aircraft, etc. Another interesting feature of using a wide angle is that it exaggerates perspective. One effective use of this consists of using a wide angle lens combined with placing the camera near the object. This will make the object in question appear larger, more impressive than it really is. For an higher, wider angle make a panorama.

Decreasing the field you get a narrow angle and a zoom-effect. This means you can take far away objects virtually close to you. An interesting effect is, that it also makes the background more "dense". Another interesting side effect is distance foreshortening, meaning that the distance between various object is becoming compressed, suggesting less space between objects than there really is. 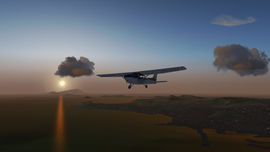 Showing the effect of the low sun and the water shaders

The most appealing photos in real life are made in the morning or evening. The light has a warm color and the shadows and ambient colors are soft and long which gives fantastic impressions. The noon gives hard shadows and strong contrasts, which are hard to deal with.

This applies to FlightGear as well. So play a bit with the time of day, especially Dawn/Morning/Afternoon and Dusk. Play with the seasons and locations as well. In the winter near the poles, the sun is low, while near the equator the sun is standing high in the sky. As an example, this gives nice effects with the water shaders.

Our weather has improved much with the addition of advanced weather. To enable it, you must open the Environment > Weather dialog, then check "Advanced Weather" and click "OK". With advanced weather enabled, clouds are placed while taking the terrain and wind patterns into account, making for much more realistic cloud and weather patterns. Advanced weather works best with atmospheric light scattering enabled as well.

The choice of the location depends a bit what you want to show. So what want you to show? Do you have already a theme in mind?

As an example for showing an aircraft just for presentation, use an "empty" background like the sky, sea or desert. If you want to show the aircraft during operation you could choose some of FlightGear's better airports like EHAM, LFPG as the background, or some of the more detailed custom sceneries.

As in real life, in FGFS the pictures often have to be corrected in colors and white balance. This can be done with almost any image editor. In GIMP this can be done through Layers > Colors > Brightness and contrast.

When keeping this all in mind, you can make some stunning pictures. Try and play with as much you can, look at real images to get hints or try to copy a real life image in FlightGear. All this will help you to take good pictures! 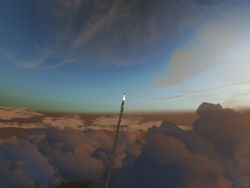