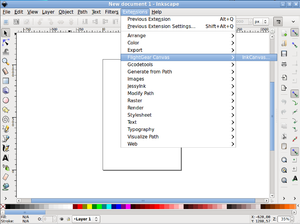 Come up with a simple Inkscape extension that can serve as the foundation for creating Canvas based MFDs more easily. Ideally, in conjunction with Richard's MFD framework and the Emesary IPC system (eventually), maybe even taking Phi in mind ?