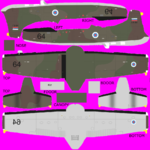 By editing a livery you can give an aircraft a new paint job, a new livery. In some other flight simulators and games a livery can be called a paint (scheme) or repaint. A livery consists of one or more textures, wrapped around the 3D model representing the aircraft, together with an XML file needed for FlightGear to know which texture(s) to use.

This howto is intended to be a help guiding potential livery artists as well as the more experienced ones needing a refresher.

Where to find an aircraft livery

The installed aircraft can be found in $FG_ROOT/data/Aircraft, where $FG_ROOT is where FlightGear is installed. Each aircraft has a directory that contains a few text, 3D model and image files organized in several subdirectories. In that structure is one or more liveries and one or more text files, XML files, describing it's use. The liveries can usually be found in the ../Models, ../Liveries, ../Models/Liveries or some other directory, depending on how the aircraft's author organized the files and directories. 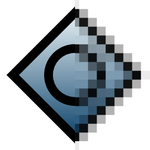 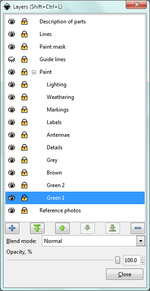 Start the work by saving your livery while it is still empty. That way you will not get carried away, forgetting to save it just to be reminded in the harshest way, maybe having hours of work lost. The file should usually have a size of 1024*1024 pixels, but it does not have to be a square and any rectangle with 2n pixels side, for example 256, 512 and 2048 pixels, will do. Larger image size will result in more detail being shown, but also a slower running FlightGear. In particular, users with lower end computer might experience a delay when loading the model and texture of other multiplayer aircraft coming within a certain distance.

While working on the livery save the file in different versions while you are adding new features, so you don't end up messing your only file up by mistake. Copy the file, with the right size, to the aircraft's Models directory or Models/Liveries directory, depending on how the original author organized the aircraft's folders, and name it default.png.

On aircraft that supports changing the livery shown to other MP pilots there are one XML file for each livery. The livery XML file usually is named as the livery file, except for the file type extension, and in its simplest form it can look something like this:

Many aircraft has additional properties that are set up in a similar way. There can for example be separate livery textures for the fuselage, wings and tail. As always it is a good idea to look at the existing XML files of the aircraft you want to make additional liveries for. Also the simplest way to make a new one is to copy and modify an existing file and save it under a new name.