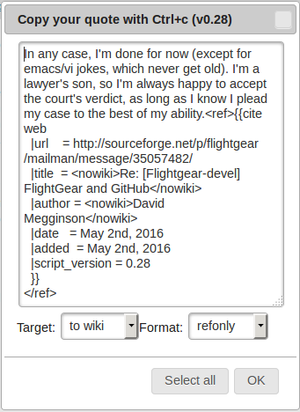 The Instant-Cquotes script is a browser addon (user script) implemented in JavaScript in order to convert excerpts (created via copy&paste) from FlightGear forum or mailing list postings into MediaWiki markup/quotes to be used on the FlightGear wiki. It is supported by Firefox, Google Chrome/Chromium, Opera and Safari. It is being developed and maintained by a group of volunteers involved in maintaining the wiki and in trying to provide more up-to-date information to end-users who may not be as involved in the various FlightGear-related communication channels.

The aim of the Instant-Cquotes script is to help wiki editors to copy relevant excerpts from such sources, formatting them as proper quotations, and bootstrap new articles collecting them until a dedicated rewrite is made. It can also be used to reuse announcements to update the changelogs, newsletter or the Release plan/Lessons learned page. 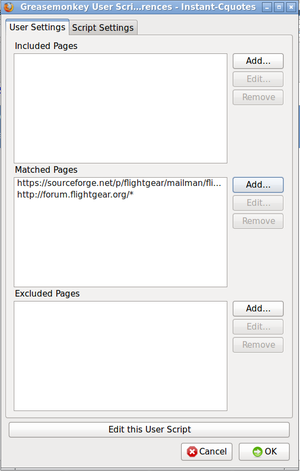 As of May 2016, there is no separate version available for mobile use. Your best chance is installing a userscript addon on Android, like one of those:

For installation instructions, refer to Tampermonkey for Android or How To Access Greasemonkey Scripts on Android Phones.

Testing/feedback would obviously be appreciated - if in doubt, feel free to just edit the wiki page to add your findings/questions. 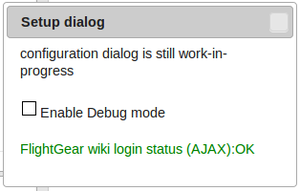 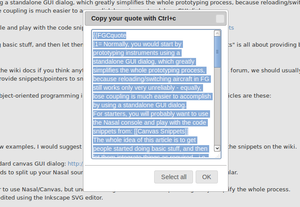 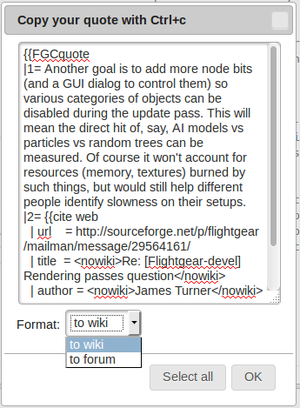 Porting the script to support other browsers/script engines is greatly appreciated. Typically, this should be pretty self-contained, because all main APIs are intended to be encapsulated in a so called "Environment" hash, where APIs that are specific to a particular browser/script engine should be provided with a wrapper. As of mid 2016, most APIs are now kept inside such an Environment hash (look at the GreaseMonkey hash for reference/details), so that it is now even possible to turn the script into a standalone FireFox addon without having to change much of the underlying code. 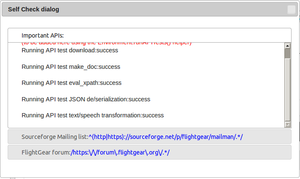 Changes that should be mentioned in the changelog, should be added below (and moved to the #Changelog section subsequently: