From FlightGear wiki
Revision as of 18:10, 6 January 2019 by Hooray (Talk | contribs) (→‎preferences.xml and autosave.xml: outdated, this was changed by core devs without updating any of the docs accordingly ... we should probably introduce a template to manage such things in the future ?)
(diff) ← Older revision | Latest revision (diff) | Newer revision → (diff)
Jump to: navigation, search 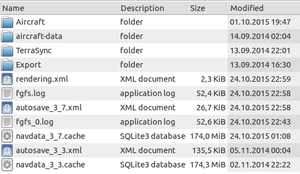