The FlightGear development team is delighted to announce the v2017.3 "Prague" release of FlightGear, the free, open-source flight simulator. This new version contains many exciting new features, enhancements and bugfixes. Highlights in this release include performance improvements for some graphics cards and scripting, and volumetric grass that reacts to helicopter rotor downwash. Check out the Changelog to find out what else has changed.

Founded in 1997, FlightGear is developed by a worldwide group of volunteers, brought together by a shared ambition to create the most realistic flight simulator possible that is free to use, modify and distribute. FlightGear is used all over the world by desktop flight simulator enthusiasts, for research in universities and for interactive exhibits in museums. FlightGear features more than 400 aircraft, a worldwide scenery database, a multiplayer environment, detailed sky modelling, a flexible and open aircraft modelling system, varied networking options, multiple display support, a powerful scripting language and an open architecture. Best of all, being open-source, the simulator is owned by the community and everyone is encouraged to contribute. 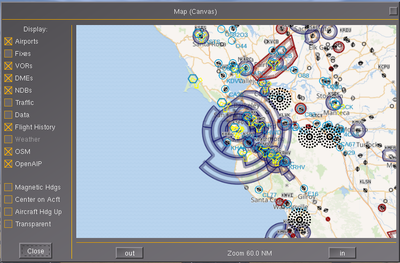 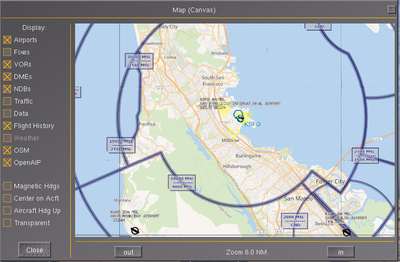 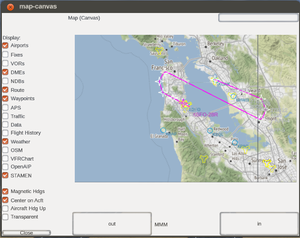 A Canvas GUI dialog created by the Pui2canvas parser mapping a subset of PropertyList PUI/XML markup to Canvas widgets, showing a MapStructure map.

Stuart Buchanan has added some new Nasal Canvas MapLayers to support Slippy Maps, as used by most web-based mapping services such as OpenStreetMap. This allows us to display sectional charts (for the US - vfrmap.com), and airspace information (courtesy of openaip.org), as well as a OpenStreetMap data. Additional web-based mapping can be trivially added by creating a new lcontroller. See Nasal/Canvas/map/OpenAIP.lcontroller for an example.

The canvas Map dialog has been updated to support these layers. Map data is retrieved over http and cached locally.[1]

it0uchpods and his team, the it0uchpods Development Group, have recently made this statement regarding their IDG-A32X:

it0uchpods has added an improved and updated autopilot for the Boeing 777. It is available from GitLab, and is also available from FGADDON: thus, it will be included in the next release of FlightGear via the Launcher.

D-SVEN has developed his hometown airport EDFZ in Germany to a glider paradise. By adding a AI-towplane and some thermals around the airport, everyone can now check his gliding-skills there. Simply attach yourself to the towplane and follow it into the air! Once you see a good thermal cumulus somewhere, disconnect and circle around the cloud! Have fun on long distance trips without an engine! A detailed installation guide and a tutorial on aerotow is included in the custom scenery. Some osm2city-buildings are also added. Currently, we are working on a MP-capable towplane scenario, so that towing events can take place in the future.

The FlightGear Team will be attending FSweekend 2017, from November 4th to 5th at Lelystad Airport, the Netherlands. Early preparations are currently being made on both the forums and mailing list. If you have any additional ideas, let us know on the forums

Editor's note: This month we have two screenshots of the month, owing to the delay in publishing the June contest. Be sure to check out the September forum topic below! 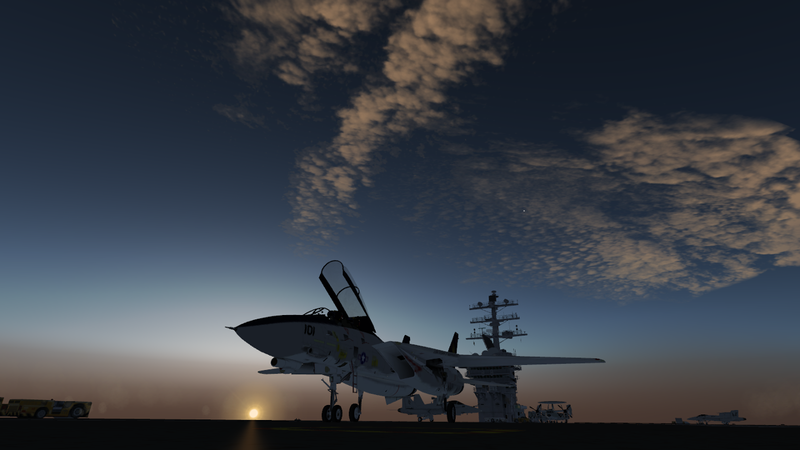 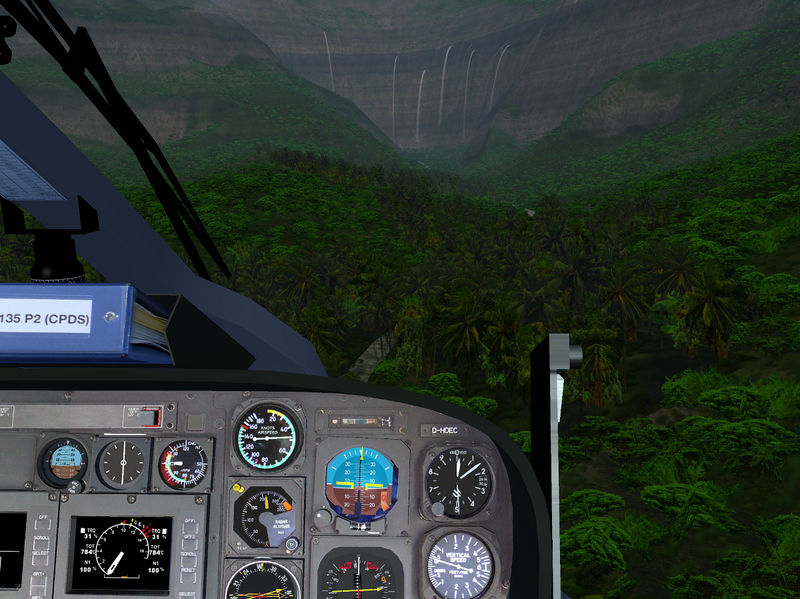 If you want to participate in the screenshot contest of OCtober 2017, you can submit your candidate to this

for participation rules. For purposes of convenience and organization, after all the entries have been submitted, a new forum topic will be started containing all shots in an easy-to-view layout. The voting will then take place there. Once the voting has finished, the best screenshot will be presented in the Newsletter edition of *October*.