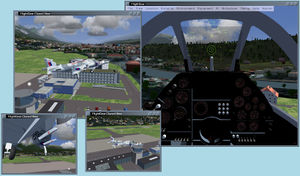 This allows Flightgear to have multiple top-level windows showing independent views of the scenery, and will also allow implementation of things like cockpit rear-view mirrors and cockpit displays of external views.