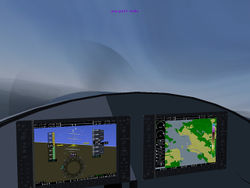 Take off from the smaller EFHF airfield in Helsinki, or try your luck fighting the virtual traffic at Vantaa, and head toward the port of Helsink. Look for the Hartwall Arena, the Pasila tower, the railway station and the Olympic Stadium along the way. Make your way out over the Gulf flying just west of south - a heading of 190 should set you up nicely for a sightseeing tour of Tallinn. Try to come in from the west and do a sweeping left turn over the capital of Estonia, looking out for the Swissotel, Olympic Hotel, the Television tower, and other important landmarks in the capital city of Estonia. Make sure you look out for St. Olaf's Church, the tallest building in the capital city. Make your way over the Ulemiste Jarv (lake) to land on runway 09 at Tallinn's main airport.