Folding at Home - Help conquer Corona and other diseases

Discussion about the upcoming 2020.1 release is underway and will have progressed on the sourceforge devel mailing list by the time this newsletter releases. See here

Use the sourceforge tickets to report bugs or raise issues.

Compositor and new renderers are in a state for beta testing in 2020.1 nightly branch 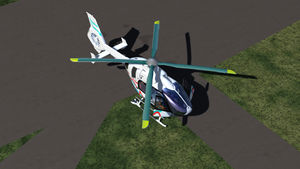 Eurocopter EC135 showing shadows on the ground with the compositor enabled. Not yet available for all.

Nightly builds with the Compositor as an option will become available soon, likely in April, at download.flightgear.org.

Meanwhile, Windows users can download the latest changed compositor files, and then extract over the contents of the /bin folder, replacing non-compositor files in the process. Remember to back up the old /bin folder. The relevant Compositor pipeline can be activated with the correct command-line option from the Compositor wiki page e.g. "--compositor=Compositor/als" for the new ALS.

See here for hints at some of new graphical features coming with the new ALS. There is also a low spec renderer to replace the old default renderer. Usual disclaimer: Not everything may make it to first release - I personally don't know, some things may turn out to not be the best option, or viable.

See the forum thread for screenshots.

Each combination of Operating System version, graphics driver version, and GPU is unique with its possible quirks and you should test for new issues on your system.

The in-sim launcher now supports a basic dialog for Aircraft Carriers thanks to James Turner. For refinements submit feedback using tickets or mailing list). To select a carrier click on the ship icon next to the location search bar to see a list of available carriers. The USS Harry S. Truman is a highly detailed carrier positioned off the picturesque Hawaiian island of O'Hau near PHNL.

There are also a number of other changes like being able to toggle scenery and aircaft add-on folders in lists using a check box.

Article of the month 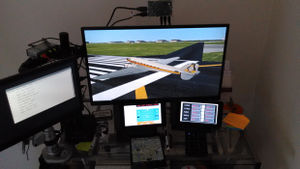 Raspberry Pi4 running flightGear. One touchscreen and Raspberry P3 A+ with Phi PFD and a second with Phi radio stack.

After the 2020.2 release, some work lies ahead - any help would be greatly appreciated. Please get in touch via the developers mailing list to learn more.

The core team needs help from a Windows user that is able to maintain a good working Window build. This process already exists to support our Nightly and Release builds, but we are seeking an individual to keep it in good working order. The ability to compile FG from source and some Windows batch scripting is a required skill. If you are willing and able to take up this role, please reach out to James Turner, or get in touch via the forum [1]

Frtps has released scenery for the Queensland-New South Wales border to test combining landcover data sources from different states in preparation to rebuild the entire continent and make it available via TerraSync. The materials and textures pack has been updated. Downloads available from the FGAU website.

The Australia scenery project is coordinated through github and the forum thread is here. The project aims to combine multiple data sources using scripts, which can then be leveraged to generate other parts of the world.

The scenery features recent additions to scenery generation and/or rendering including improved cliffs, plantations etc. also by frtps. To see these you would need a nightly build.

ProfessorS has released rebuilt scenery and some updated materials and textures for the whole of New Zealand. He has indicated the scenery is now ready for upload to Terrasync

Montagdude has released scenery for Rhode Islands and Massachusetts in the USA.

Thanks for reading FlightGear Newsletter March 2020!