SquawkGear is the much-awaited client that allows FlightGear users to connect to the largest and most realistic sim server in the world: VATsim. VATsim is simply a network that can, in theory, take any sim, although the current ones are X-Plane and Microsoft Flight Simulator. Using addons like SquawkBox for MSFS, pilots must adhere to strict rules about realism. A valid flight plan must always be submitted before takeoff, for instance. And pilots must contact Air Traffic Control before any actions.

SquawkGear brings this wonderful server to FlightGear. While installation is not as simple as that of VATsim clients for MSFS, pilots are now able to connect to the VATsim network and use chat and voice to communicate with other players and ATC. Since scenery is very different between sims, aircraft do not always appear where they are supposed to be; a MSFS user might see you hovering a few feet above the ground, for instance.

With its first release, SquawkGear is an excellent addon for pilots wishing to get on VATsim without having to buy the payware sims. It is strongly recommended that you read all manuals before connecting to VATsim; not only because installation is tricky, but also because there are certain rules to be followed on VATsim. You will find that your KSFO on VATsim is a thousand times more under control than your KSFO on one of the mpservers!

Special thanks to Ivan (Reed) for all of his work!

The Bombable air combat add-on to FlightGear received a major update in June. Bombable now has these features:

nickyivyca is currently working on the Boeing 787. He corrected the FDM and changed some details in the model. More information in the forums.

He has also been working in the CRJ-200:

"The CRJ-200 and 787 were made with very similar systems and such. Neither had a 2.0 compatible AP. So, I found out what was wrong with the one for the 787 first, and made those changes to the CRJ here. Both worked. I also did some FDM improvements, like moving the engines to where they really are and adding gear smoke and contrails." - says he in the forum thread.

richter and snipey are working together in improving the Cessna T-37. Items that have been improved/created:

More information at the forum.

MOJO is tuning the CH-47. He spent some time adding external cosmetics which main purpose is to add more detail to the Chinook. He added antenna and aerials, domed windows, pitot tubes, whinch, engine hub details and started with the internal cargo bay. He is going to be adding an animated refuel probe and will be doing some more liveries also, his main aim is to try and get the model more defined.

Zexe created a SF50 model. It is still at a very early stage. More information here.

Browsing through the files, HHS found a rotorcraft carrier model and made a scenario to run it, which is available on Git.

London Gatwick (EGKK) is being further improved and is in the second phase of development - night textures. All the buildings and features are currently being modified by karla to give suitable lighting and make London Gatwick even more attractive to FlightGear commercial flyers. Landing or taking off from Gatwick at night should add much to your enjoyment of the game - and most likely extend the hours you enter in your pilot's log. Further improvements and many minor changes are also being made to the existing models and daytime textures. The link shows an image of the part completed airport at night http://www.donlavelle.net/flightgear/flightgear19.html.

The new scenery will be released early in July.

With the terrain updates that were discussed in the March edition still in our minds, we now have another feature for the area; taking it yet another step closer to a bussy and realistic representation of the real emirate!

After looking jealously at the greatly enhanced airport Schiphol (EHAM) and the latest highlight Gatwick (EGKK) Mike (D-SKY1) decided to create interactive traffic for Dubai International Airport (OMDB). Based on the existing airport layout in FlightGear the traffic pattern for taxiing between gates and runways has been created in TaxiDraw next to a timetable for runway usage.

Although no modelwork is done (yet) a big bunch of scheduled flights is now added to this important hub in the middle east. As Dubai is home port for Emirates Airlines (UAE) only Emirates flights are included. Within the next weeks more scheduled flights for AI traffic at Dubai will be added. During the process of creating AI traffic he tried to stay as close as possible to the real life timetable for Dubai International Airport querying several sources for double checking.

As Emirates Airlines (UAE) is one of the most important customers for the Airbus A380 (UAE just ordered another 30 units of A380) the Emirates Airlines livery has been added to AI aircrafts A380. Additionally some minor errors in several traffic files concerning changed ICAO codes for some airports have been removed.

All changes are available via Git. Enjoy the enhancements; and always follow SIDs and STARs to prevent collisions ;)

Atlas Virtual Airlines, FlightGear's most populated airline, has been a hit success in its inaugural months since opening in mid-April. The airline, however, couldn't have made it without the guidance of its two current leaders: MaverickAlex (Alex Park) and SkyWlf77 (Jason Sheperd). Besides sinking their own cash into the airline for site domain and software, these two founding members have sorted out many mis-judgements of Atlas and helped to form a strong and community-bonding airline. Jason, the vice-chairman and moderator, helped revamp AVA's standing on the forums and turned many former anti-Atlas-ers into supporting members, which has been very beneficial for the FlightGear multiplayer community. Thanks to him, members can now feel confident to join an airline that was, just months ago, in the midst of intense controversy. Sheperd has taken a strong stand against arguments and flame wars on the Forums, intent on preventing the locked-topics and arguing members that degraded the VA Community during the VA "Dark Ages". But now, Atlas has flourised into a friendship-filled and happy organization that members find enjoyment and fun in.

Meanwhile, Alex, the current chairman and administrator, independently designed an awesome and top-of-the-line VA website for Atlas pilots. He has also worked with nightmares of coding to get drawing-board ideas implemented. And on top of it all, Alex is finishing up his Bombardier Dash-8 400Q, designed especially for Atlas Express flights. This very nicely modeled aircraft will also be available to the public, underlining how Atlas Virtual Airlines is really benefiting all of FlightGear. Alex is the brains behind it all that makes Atlas so sophisticated. His partner, Jason, has the ideas and people-person skills that gives Atlas the openess and fun that attracts its 50-plus members. So, from all of Atlas and those who follow it, thank you, Jason and Alex!

BRIEFS: Atlas celebrated its 50th member this month, a landmark achievement for a VA that is still newborn!

This month: B-25 Mitchell 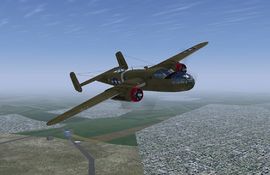 The B-25 served in almost every theatre in World War II. From Europe to the Pacific, the Mitchell was there. One of the most famous missions accomplished by B-25s was the Doolittle Raid on Tokyo, when a group of 16 B-25s attacked the Japanese mainland, raising morale in the United States, and changing the priorities of the Imperial Japanese Navy, and possibly changing the direction of the war.

The flightgear model looks good on the outside. The author has done a lot of work on the textures, and this is improved even more by some excellent liveries made by Gooneybird that have been added to the B-25 base package by the author. The landing gear, engines and canopies are all carefully modelled, too.

The Cockpit is a little bit threadbare, with no chairs, two pilot figures, and the standard six instruments, which is more than enough to fly with. The only other issue I could come up with was the lack of weapons, but that is only an aesthetic problem. The B-25 handles nicely both on the ground and in the air. I can't talk about accuracy, however, as I have never flown in a B-25, so I don't know how it 'feels' in the air.

The Mitchell sounds great, too!

How about having your own Copilot to help you fly your heavy metal? Imagine: You're at 3000 ft making a hand controlled descent to EGKK 26L in your 777-200ER: "flaps down"; check airspeed and altitude; you're now five miles out; "undercarriage down"; reduce speed a little more; "flaps down"; you seem to be slightly overspeed; "spoilers"; touch down "brakes" then "reverse thrust"; "flaps retract"; now take a look at the detailed scenery while taxying to your stand; "view" and "zoom out".

Those using Windows can employ Shoot - a free user-editable voice command utility. This may be used concurrently with FlightGear to recognize spoken words or phrases and carry out keyboard actions - including sequential or Shift/Alt/Ctrl... keying. Unfortunately Linux users do not have access to such a powerful utility.

Download Shoot 1.6.4 and install it on your PC. You also need the Microsoft Speech API (SAPI) which is also free; the link is given on the Shoot website. The free Microsoft .NET should also be installed using the Shoot link.

Shoot may be edited to obey verbal commands such as "start engines", "maximum thrust", "undercarriage up", "flaps retract", "trim nose down", "deploy spoilers", "reverse thrust", "view exterior" - or whatever you choose. Try it and add more immersion to your flying.

For upcoming releases, pilots' aircraft will also be able to be ignored. This is part of a strong offensive against "trolling" that disrupts MP flying.

Toggle them up/down in your ATC Options menu under Carrier; Check-Apply raises them, unchecked-apply lowers them.