The move of the FlightGear development repositories from Gitorious to SourceForge is now complete. We had to move our repositories, due to Gitorious shutting down end of May (see this statement for details). A historical read-only record will remain at Gitorious.org, as well as other public locations.[1] In addition, hooks have been added so that every commit to either the FlightGear, SimGear or FGData repositories will (hopefully) send a message to the flightgear-commitlogs mailing list.[2]

The new repositories can be found at https://sourceforge.net/p/flightgear/_list/git

The OpenRTI project, maintained by Mathias Fröhlich, has been moved from Gitorious to SourceForge.[3] OpenRTI is an open-source HLA/RTI implementation, used by FlightGear. To move your local clone over to the Sourceforge repository, you can just set the URL of your remote repository to the new URL. Below is an example for the usual clone (where the default remote repository is called origin):

Tim made a commit to SimGear that fixes compilation with current OSG sources. Unfortunately, FlightGear does not actually work with this OSG due to a bug in the mesh optimizer. If you want to use current OSG, check the osg-submissions mailing list for a fix.[4]

Torsten has added the relevant documentation for using a state machine in FlightGear to Autopilot configuration reference#State Machine <state-machine>. He also fixed a related bug in SimGear, so make sure you have pulled up to this patch.

If someone with a better wiki-fu can beautify the article addition, that would be great.[5]

Development and test of spaceflight in FlightGear continues. Based on information in the official crew manual, the Space Shuttle has received various digital autopilot (DAP) modes for maneuvering in orbit and an improved control logic for thrust vectoring during ascent. A guidance computer for re-entry has been added to aid trajectory management during this rather challenging part of the mission. The spacecraft has now been tested for a successful de-orbit maneuver aimed at a pre-selected landing site.

Work on simulating the aerodynamic, thermal and structural limits of the orbiter, as well as damage, is currently in progress. 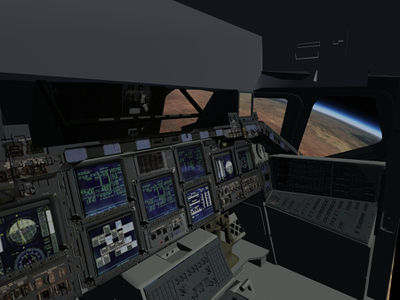 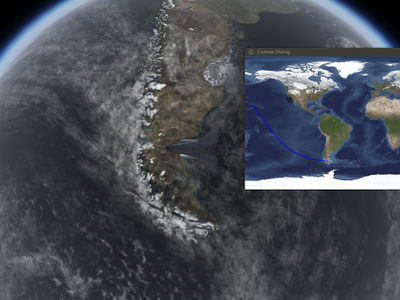 The addition of a 3D cockpit has also begun; currently, most instruments are simply static textures, but several displays should be functional soon. Other developments are more generally useful beyond the Shuttle, such as a ground track map and improvements to the Earthview rendering engine using procedural overlay texturing, making textures appear at higher resolution than they actually are.

Test flights using a Nasal-controlled object on an analytically-computed Kepler orbiter suggest that docking to an AI space station or interactions with satellites should in fact be quite possible to implement.

Modelers interested in realistic spaceflight are very welcome to come aboard and help taking FlightGear to the limits.

Richard Harrison has been looking into Rembrandt to find the cause of unreasonably low frame rate.[6] To cut a long story short, he has found that Vsync is causing the problems. After making some changes to the code so that he could turn Vsync on or off, he found that the following command line options provide a great increase in performance:

These flags increased his frame rate from 30 fps to 60 fps (when drawing nothing).

You can read the full report at http://chateau-logic.com/content/deferred-rendering-rembrandt-performance.

A small patch has enabled Canvas to display transparency in an SVG file.

Currently, there is only support for the fill-opacity and stroke-opacity properties, but there is a small bug if the value is 0.0.

Alternatively, those who are able to patch FGData themselves, can download mp-hot-fgdata.patch, which adds a checkbox to the Multiplayer Settings dialog to enable or disable the collision detection.

This month, various airports in Belgium are being populated with 3D buildings and shared models. The source for most of the models is the Belgium Custom Scenery Project by David van Mosselbeen.

FlightGear has been a featured project on the front page of SourceForge throughout May. There are a variety of inputs into the selection process and it is some nice exposure for our little project. We should expect some increased traffic and a few new visitors taking a look at FlightGear for the first time. Please keep this in mind if we see more new questions on this list or on the forum than usual. [7]

A new blog by gsagostinho focused on sharing screenshots of short flights, particularly with GA aircraft. The link is http://fgflights.blogspot.cz/?view=sidebar.

The FGCom server was previously provided through generous donation of and maintained by a contributor who has since quietly left the project.[8][9] A new maintainer has now appeared and the server is again available.[10]