As part of prototyping a TerraGear scenery build server, F-JJTH has started working on a proof-of-concept for a web-based TerraGear GUI/build service. This can use the precompiled-TerraGear packages created and provided by saiarcot895. We are currently looking for people interested in picking up this prototype to continue developing it over time. All the difficult bits are now in place (namely the TerraGear setup), as well as a compelling web-based interface. People interested in helping with this, should ideally have some web programming experience, for TerraGear specifics you can probably just get in touch with psadro_gm and papillon81 (or refer to the docs for starters). Also, we're hoping to also create Linux packages for the web interface, so that installation/updates can be just as easily handled using the deb/apt/ppa package manager.

Primarily, we are now looking for hosting, not just for the TerraGear setup itself (which should be fairly powerful), but also for those deb/apt packages. If you'd like to help with this, please get in touch via the forum.

Continue reading at "Mission" for helicopters...

As of April 4th, several bug fixes by Colin Howell have been merged into the "next" branch of FlightGear's source. As per issues #1400, #1423, and #1427, these are only small fixes in portions of code, but they still may have noticeable affects on YASim aircraft, including making the solver fail with some aircraft and making other aircraft perform better. Currently these fixes are loaded unconditionally, so there's no opt-in or opt-out system in place, meaning that we need you to help test as many YASim aircraft as possible. (Please note that these patches are only available with a latest binary, i.e. a nightly from Jenkins or a compilation from source, and a corresponding FGData clone.) Detlef posts, "I have tested the slat patch and the twist patch and found very little problems, in fact most cases I've seen saw an improvment. Of the 15 Aircraft I've tested the twist patch on, only two wouldn't start up at all" [1]. Having a large number of non-working aircraft in the next release would be undesirable, and would suggest that we need an opt-in system for such fixes, but if most aircraft work well it will be simpler to let the patches load unconditionally.

Please report aircraft that fail to work with latest FG (but that still work in 3.0, i.e. without the fixes) on the devel list or on the forums.

Tom has updated FlightGear 3.1 to remove a lot of unneeded OpenGL state changes. Depending on the GPU/driver this can lead to quite a noticeable performance improvement. For example, he was able to get from ~120ms down to ~45ms [9].

Creating your own keybindings

A common request is how to change keys to do different commands. FlightGear makes this as easy as editing an XML file, and possibly adding a parameter to point FG to the new XML file.

In general, the list of keyboard commands is stored in the property tree and is loaded at startup or when the menu option "Debug -> Reload input" is selected. The main list of commands is available in [10], but each aircraft can add/change its own bindings through its -set.xml file, and additional config files can do the same.

If you interested in other developing, i.e. not C++ but Nasal scripting and/or XML, there are some articles listed at Category:Popular Community Requests that have been suggested, but not fully or partially implemented, and are "mentored efforts". That means that the community is looking for a hand in implementing them -- help from you -- but will also have more experienced developers willing to help you, for example by having tailored tutorials or even code snippets written for you. As mentioned in each page, please get in touch if you would like to help with one of those projects. In comparison to C/C++, Nasal is simpler and easier to learn quickly. It also doesn't require recompiling, which means that you can test and develop changes with a standard FlightGear release, i.e. off of the main download page. As long as you can run FlightGear, you can also run Nasal code and contribute. Many tutorials covering a wide range of projects are listed at Nasal, so if you know a programming/scripting language already, or would like to try something new, go ahead: read, write, try and get involved! When it comes to Nasal scripting, playing around with different tutorials and code snippets is more important than being an experienced coder.

Of course, you're also free to work on whatever you want -- FlightGear as a community-driven doesn't tell people what to do, but welcomes any contributions from anybody, as long as they have acceptable quality and are free to be licensed under the GNU GPL. So if you have something you would like to contribute back to FlightGear, please get in touch! (Preferably using Gitorious for larger merge requests, and the forums or (core-) developer's mailing list to inform the developers of what you want to contribute back.) Changes contributed 6-8 weeks before a release will usually appear in the next release, so your changes can be spread across the world.

The Making of a new World Scenery

A frequently asked question about scenery is: "Why isn't the terrain updated more often?". Most of us are probably unaware about what is required to build a new World Scenery and what is required to ship a complete set of data for rendering the world in FlightGear. As there is actually a new build in progress, we are able to present some naked numbers to give a rough impression about the resources involved.

First, there is the raw data. Roughly half a dozen databases containing more than 100GB of elevation, coast lines, water ways, roads, land cover, navigation data and all the things that make up the details of our planets surface. 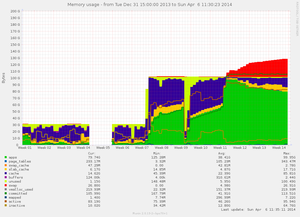 All these information have to be converted into files understandable by FlightGear. The earth's surface in FlightGear is cut into tiles, each tile containing a 3d model for that area. While generating a single tile is a not too complicated task, generating the entire world is. Roads, coastlines, run- and taxiways do sometimes cross tile boundaries so the 3d surface has to be sliced at the tile boundary. The vertices on both edges have to be at the exact same position. To guarantee, you can't fall into the abyss while taxiing across an unclosed tile boundary, all tiles have to be created in a single run with the current toolchain. The machine performing that task has to crunch all the 100GB of raw data, keep the results more or less in memory and write the results to disk. This is an extremly time and resource hungry job. The current vectorization job has been started on Feb. 28th and is still running (Apr. 6th). Probably most impressive is the memory consumption which has grown to nearly 130GB. This is RAM, not Harddisk. As the machine is unfortunately only equipped with 100GB of RAM has started to use nearly 30GB of swap space. All this only works because of just a few people working hard and usually undiscovered in the background.

NIATCA was born between December 2013 and January 2014 to offer Air Traffic Control in Northern Italy and in the neighboring area. Initially it was an ATC project only for LIPA, LIPX, LSZS and LIMC; but then more airports have been added to the project to become what NIATCA is today.

Presently, its members' efforts allow you to enjoy professional services at the following airports:

ATC sessions take place throughout the week and are planned on Lenny's website. Airport briefings and links to charts are available on the forum.

Candidates are required to:

Many people think that contributing to the FlightGear project requires writing C++ code or doing 3D modeling and that it takes lots of time, and therefore feel that they cannot contribute directly. Not so. There's a whole variety of ways to make a valuable and satisfying contribution to FlightGear without being a developer.

The Volunteer page is intended to provide a starting point for those wanting to contribute, but who don't know how. Of course, these are just suggestions. So if you have already a specific idea in mind, please do get in touch with the community to ask for feedback, using the mailing lists, forum

or the IRC channel (chat).

Remember that work in non-development areas will be appreciated as much as developer contributions (or more!), because generally more visible to the end user.

If you'd like to learn more about getting your own ideas and features into FlightGear, check out Implementing new features for FlightGear.

If you are contributing to the core simulator, or an aircraft in the master repository, you should be part of the FlightGear-devel mailing list, which is the primary point of contact for all discussions regarding the development of the simulator. You may want to check out also Howto: Understand the FlightGear development process and Howto: Starting core development.

YASim looking for a new maintainer