Difference between revisions of "FIAT G91R1B" 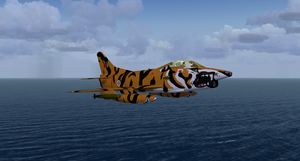 FIAT G91R1B in Portuguese tiger livery, it was a special version made for a NATO tiger meeting in the early 70's
Retrieved from "http://wiki.flightgear.org/index.php?title=FIAT_G91R1B&oldid=129132"
Categories:
Hidden categories: