Difference between revisions of "FGFSPM" 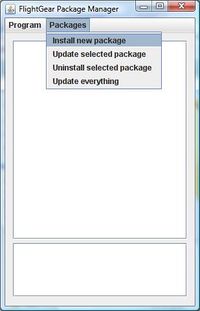 FlightGear Package Manager (FGFSPM) allows for installation and update (and will allow for uninstallation) of all kinds of FlightGear-related resources (including scenery tiles and updates to global objects and shared models, and even FlightGear's binaries).

The latest version is .2 alpha, released in October 2008.

This article is purely kept for reference here, it should be considered deprecated, the feature itself is currently being worked on as part of Catalog metadata and FlightGear Package Manager.

The program is developed in Java and requires Java version 1.6 (or later).

Updates also get simpler using the Package Manager, as users will simply have to ask the program to check for updates and it will automatically scan the list of installed packages looking for new versions of each on the net.

The current version (a preliminary alpha release) of this program can be found at https://sourceforge.net/projects/fgfspm/