The Eurofighter Typhoon is a twin-engine canard-delta wing multirole aircraft. It is being designed and built by a partner consortium, Eurofighter GmbH, founded in 1986, made up of the major aerospace companies of the four Eurofighter partner nations: 21% Alenia Aeronautica (Italy), 33% BAE Systems (UK), 13% EADS-CASA (Spain) and 33% EADS-Deutschland (Germany). Along with two other projects: Eurojet Turbo GmbH by Avio (Italy), ITP (Spain), MTU Aero Engines (Germany), and Rolls-Royce (UK), to develop the EJ200 engine for the new fighter aircraft; and Euroradar for Captor radar, comprised of EADS Defence Electronics (Germany), SELEX Galileo (UK and Italy) and INDRA (Spain). The project is managed by NETMA (NATO Eurofighter and Tornado Management Agency) which acts as the prime customer. The Eurofighter Typhoon entered service in 2003. [1]

Please note: some features do not work with FlightGear versions older than 1.9.

This aircraft is still under development, currently being undertaken by Almursi and Algernon. Both are contactable via the FlightGear Forums, where there is also a Typhoon thread. Please contact them there if you have any contributions to make to the aircraft project. 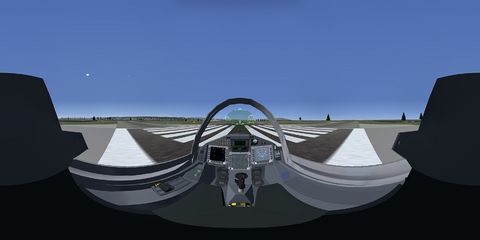 A full spherical panorama of the Eurofighter Typhoon cockpit

It should be noted that the current release of the Eurofighter Typhoon has an FDM which replicates the capabilities of the airframe to a realistic degree. What isn't yet included is the automated flight management system which computes the optimum surface positions based on pilot input and flies within safe limits for the aircraft, and more importantly, the pilot. The aircraft is capable of extremely high-G manoeuvres and pilots are advised to proceed with caution intitally (fortunately solved in the latest version of the FDM).

The Eurofighter Typhoon is an advanced 4.5th generation multirole fighter, and as such will be fitted with state-of-the-art flight and warfare technology. Examples include: advanced (for FG) communication capabilities, several Radar modes, Electronic Countermeasures, an extended autopilot with Auto Climb (inc. Auto Take-off), Auto Attack and Auto Approach capabilities, and numerous others. In addition, the current release is an experimental naval variant equipped for carrier deployment and recovery - it is likely that at some stage, there will be two Typhoon variants - one land-based, one carrier-borne - bundled in the same aircraft folder.