Difference between revisions of "CompositeViewer Support" 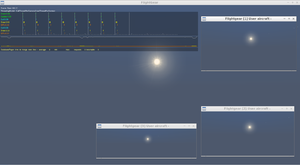 Aircraft can define their own views and so on. But only one view can be active at a time. So no matter how many windows and cameras you define in Defaults.xml, they all are relative to the current view in FG (i.e. cockpit, tower...). [28]

Back in 2008, Tim Moore provided a patch (mailing lists search for CameraGroup FlightGear Mailing Lists) to use the osgViewer class to set up windows, manage the main camera, etc. [29]

However, these windows have to use the same camera group as the main window so can only show the view from the same eye position, though typically at a different angle/offset so that one can emulate things like side windows of a cockpit displayed in a different window or monitor.[30]

Mathias Fröhlich used the slave camera feature of osgViewer to provide a "video wall" style of multiple displays that was demonstrated at LinuxTag for years. Later on, Tim generalized this to support general monitor arrangements (like a panoramic arc) and general combinations of screens and graphics cards. [31]

The default OSG model is that slave cameras are different views offset from a common viewpoint. This is easy to understand when considering a camera's view matrix, but not necessarily intuitive when thinking about the projection matrix. Because FG has its own view system we mostly treat the slaves as independent. It seems that most other uses of cameras during rendering -- for example, render to texture cameras for effects -- are best handled by slave cameras with independent views as well.[32]

People requiring multiple independent views on the same scenery, e.g. cockpit and tower view [...] these each need their own camera groups and so require OSG's CompositeViewer.[33]

And that's not really supported by the current architecture, neither by the tile cache nor by osgViewer::Viewer. We would need to move to a CompositeViewer model, which supports several scene graphs, and rely completely on the osg database paging machinery.[34]

That would require a change in current fg architecture to use a CompositeViewer instead of a single Viewer, but we're contemplating that anyway.[35]

The cameras in a camera group don't need to render directly to the screen. They can render to a texture which can be used either in the scene, like in a video screen in the instrument panel, or for distortion correction in a projected or dome environment. [36]

Neither of these are supported at the present time, but it would be a good project. We would have to start using a different OSG class, CompositeViewer, to support multiple views from independent view points. Our terrain pager would need a complete overhaul to use the PagedLOD scheme of OSG, and the Flightgear View manager would need to be aware multiple active views.[38]