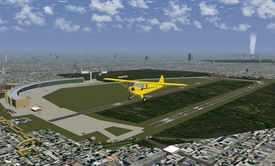 Current situation via TerraSync
Berlin Tempelhof airport was opened officially on 8 October 1923. But there was aviation activity on this area before. 1909 the Wright brothers show there flyer there for example. The old terminal was originally constructed in 1927 and was destroyed during WW II. During the 1920ties it was the one of the busiest airports in Europe. The today building was started in 1936 but never finished until the end of the war. It was declared as "Mother of all airports" by the British architect Sir Norman Foster and is told to be under the twenties't largest buildings of the world.

After the second world war it first becomes a base of the U.S. military until 1993. In the 1950ties it was also opened for civilian flights. It became famous during the Berlin airlift 1948-49. The airport was closed on 30 October 2008.