The Avidyne Entegra R9 is a glass cockpit instrument that is currently only available on the Extra500, it makes extensive use of Nasal, OOP and Canvas. The purpose of this article is not to document the actual instrument, but to streamline future development in order to avoid wasted/redundant efforts due to lack of coordination among Nasal/Canvas developers working on conceptually similar/identical MFD instruments/displays.

The code implementing the instrument is among the most-structured pieces of Nasal avionics code currently available in FlightGear, which makes use of lots of advanced programming constructs, including design patterns like MVC, observer, singletons etc. Unlike the majority of other Canvas-based instruments like the PFD/ND and EFB code, it was also properly designed to support multiple instances per aircraft right from the beginning, and encapsulates the concept of MFD pages and different page elements.

While the code itself is fairly sophisticated it is currently still highly specific to the extra500, but also to the Entegra R9 instrument itself, despite the fact that there's a lot of shared/common, and even identical, functionality required to model any MFD instrument, such as e.g. the Garmin GPSMap 196.

We believe that refactoring the code to isolate useful building blocks and encapsulate functionality, would help reduce the overhead to further develop and maintain the code, while also ensuring that useful contributions can be gathered in a dedicated library/framework, so that similar efforts can benefit from the existing code, such as NavDisplay, MapStructure, Canvas Animation Framework and Canvas MFD Framework.

Over time, these frameworks will basically materialize automatically if we constantly generalize complex avionics code and try to put similar functionality into corresponding libraries.

In addition, the R9 is one of the most complex, and most integrated, glass cockpit displays, much more integrated and sophisticated than typical airliner avionics, because it contains PFD/ND/CDU and EFB functionality and also fairly advanced GUI support, thus it is an ideal use-case, and testbed, to identify, extract and generalize useful functionality that will automatically benefit other aircraft, which are likely to require much less sophisticated avionics in comparison.

Also, the R9 contains fairly advanced support for different types of maps and charts, those should ideally be implemented on top of the MapStructure framework in order to ensure that these are efficiently handled, but also so that such charts can be easily reused for other purposes, including GUI use-cases.

Even just the "mapping" part of the instrument could greatly benefit from MapStructure (and vice versa, once the Avidyne implements the corresponding layers) [1].

That is why we NEED to have a single back-end that can be heavily optimized, and parts of it re-implemented in C++ This is already happening with the MapStructure code.

MapStructure is not just a "generic map", it is a MVC framework for Nasal/Canvas in general, mapping is just one manifestation of it at the moment. Right, it wasn't planned that way, but we have already added layers that are not strictly about mapping. 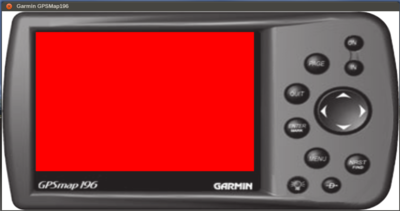 This is an adapted version of the Garmin GPSMap 196 that is currently being developed by F-JJTH. Here, the whole instrument is entirely set up in XML space without using any Nasal, including buttons/event handling, but also the embedded canvas region that serves as the 'screen'. The idea is to allow arbitrary MFDs to be specified in an aircraft-agnostic fashion, including displays like a PFD, NavDisplay or EFB. For details, please see Canvas Glass Cockpit Efforts.