From FlightGear wiki
Jump to: navigation, search
For the An-225 in the official FGAddon aircraft repository, see Antonov An-225 Mriya.

The Antonov An-225 Mriya (NATO reporting name: Cossack) is a transport aircraft with six turbofan engines. It first flew in the 1980s and was developed from the smaller four-engined Antonov An-124.

The Antonov An-225 is the longest and heaviest airplane ever built. Is part of the FlightGear Space Program with assigned cargo missions for you around the Space Program Airport Network. See mission list

The new version of the Antonov An-225 has now 2 models to transport, reverser, a complete navigation system and sounds. 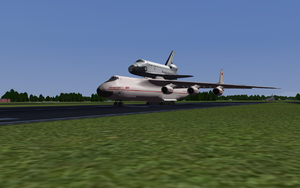 All variants are included in the main model. User can change the variant easily in runtime just by a switch in the cockpit panel. 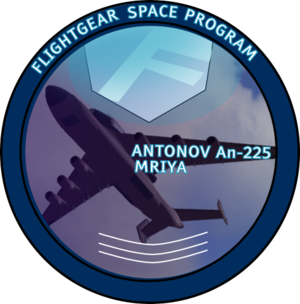 The AN-225 is been developing and tested on several platforms, including GNU/Linux, Windows XP, Windows 7, and Mac OS X with FlightGear 3.2 3.4 and GIT.